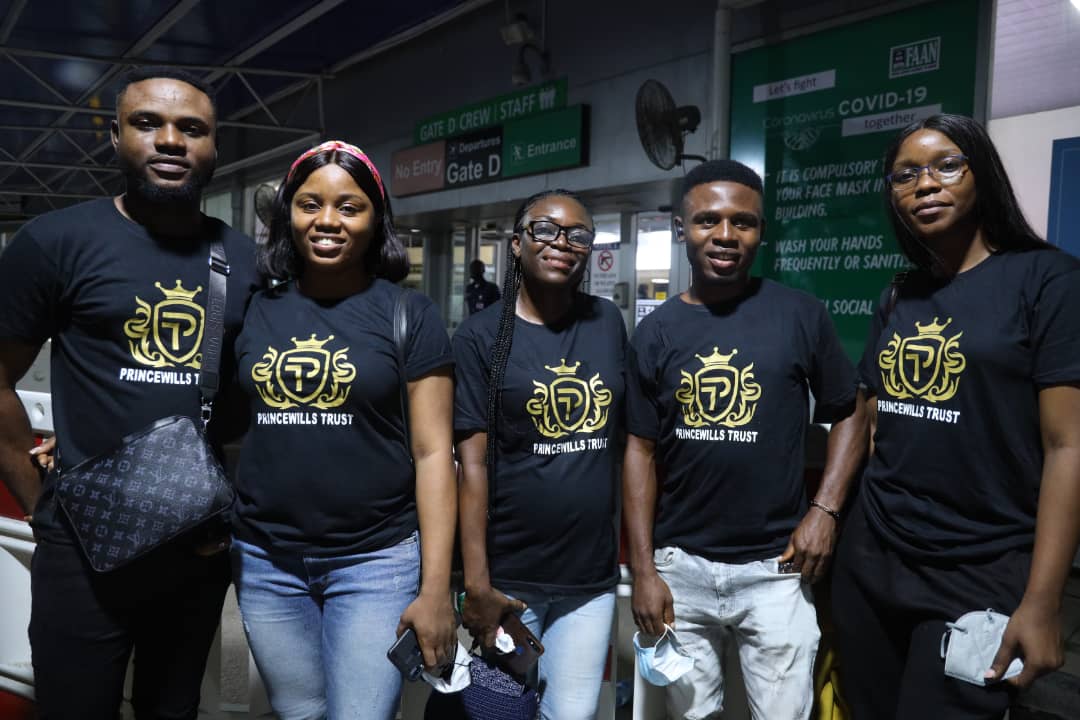 “The entrepreneur always searches for change, responds to it, and exploits it as an opportunity” – Peter Drucker.

Contesting in competitions is one activity I do not really fancy, not because I lack the capability, but past experiences have made me look away and just admire the process with its catching prizes rather than get involved.

The Princewills Trust 2021 Vision and Success Opportunity challenge with a prize of an all expense paid trip to Dubai came to me as one of those many competitions that had winners already before the competition even began. However, I got persuaded by a father figure who ensured that I entered the competition by completing the online registration, which I did, met the criteria and entered the challenge fully. Interestingly, the challenge was specially put out for Students from Rivers State. 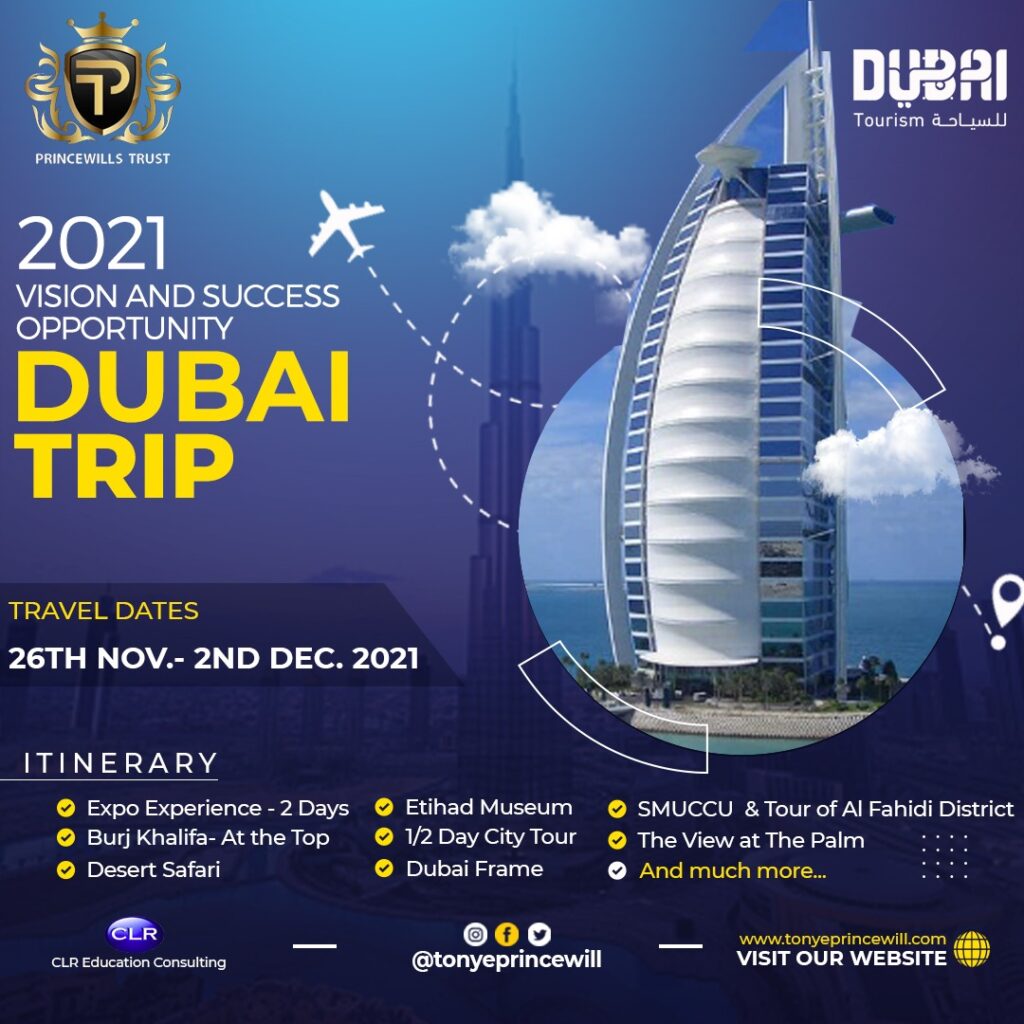 The flyer for the Dubai trip

We were sent emails on how to go about the challenge with so many rules and it seemed like a very tough one to go through. I literally had the feeling not to go further, but my earlier motivator will always show up. The idea was to write a pitch on an innovation, vision, or business idea I think can bring about development and advancement of our society.

Being a young chap, I had a whole lot of idea in my head, but I still needed that one unique innovation that would earn me the ticket. I had lot of talks with friends, because I wanted their remarks first before deciding to work on any of the ideas, I had up my sleeve. Finally, I decided to go personal, asked myself few questions and tried to pick out a problem I had that needed a solution. I had to see myself as a human in the society that had a problem and needed a solution.

As a child, speaking in my indigenous language has been an issue for me, more like a burden because I felt so incomplete as an Ibani (a clan in the Ijaw tribe of the Niger Delta region of Nigeria) daughter. That gave me an innovative idea of the INDIGENOUS LANGUAGE TRANSLATION APP which could translate English Language to Ibani language and Ibani to English language and even aid easy learning and connect you to online tutors. I finally had to put pen to paper and had my pitch ready before due date for submission.

Weeks later I received an email confirming me as one of the winners of the challenge. I could not contain my joy and excitement. This was my first time and I got in without getting someone to alter the process (Man-know-Man). We got announced on the media and social media platforms to mark the end of the challenge and a travel date of September. Preparations kicked off, and after a lot of travel challenges and rigorous procedures to go through and requirements to be met, we were finally scheduled to leave Nigeria on November 26, 2021.

Leaving Nigeria to Dubai was super exciting for me, not because it was my first, but the reason for the trip was one filled with so many opportunities waiting for me at the other side of the world. I had the opportunity of meeting my co-winners – Soruchi, Samuel and Melford (best travel squad). We arrived in Dubai after a connecting flight from Nigeria to Kenya and then the U.A.E.

This was the most activity packed, yet fun trip I have been on and not a single bill on me. There is this thing with enjoying money that is not yours, but I never felt that way, not like I feel entitled, but this was too real to be true but funny enough, I was already living it.
Touring the U.A.E. with the mindset of meeting opportunities and discovering innovative ideas was a major mind shift for me. My brains were on fire and my body super hyper; knowledge exchange was in top gear. Like I earlier mentioned I had the best travel squad, very smart, business oriented and intelligent young minds who were also on the same direction throughout the trip.

“To see an opportunity, we must be open to all thoughts” – Catherine Pulsifer.

This quote always came to mind whenever we got to a new site and as we drove round the city beholding its beauty. A lot was in Dubai for us to learn and understand. We would always talk about Nigeria and our beloved State as we went deeper into the roots, leadership, values, cultures, and religion of the U.A.E. I discovered tourism in the most amazing manner and how much it has helped the country economically. The U.A.E. has a population of over 9 million; 1.4 million are natives while the rest are foreigners. It has opened its hands to a lot of visitors and innovation and the hospitality is top notch despite its status as an Islamic Country. We admired how responsible and futuristic they were towards their development. Indeed, nothing is impossible if you set your heart to achieve it and diversity is no excuse.

However, we had amazing time out with great personalities in the entertainment industry courtesy our Sponsors. I would never have imagined meeting DBanj and Yvonne Orji in Dubai talk more of sailing on the same yatch. We finally had good Nigerian meals which for me were a good way to bring the tour to an end — I will tell my food story in Dubai sometime in the near future.

There are rare humans we doubt exist, and I think Prince Tonye Princewill is one of those rare humans. I really admire people who believe in human investment and meeting one who is passionate about it is the HIGHLIGHT of the challenge. For every conversation with him was fruitful, even the jokes had a message accompanying it.

Getting to dine with someone so intelligent yet humble is a rare privilege and humbling too. For years I have searched for the right mentor, a lot of persons I have gone into their DMs ignored me but I got an encounter on a platter of Gold.

I was scared he would see me as an unserious person because I was the clown in the squad who will carry fufu and soup from Nigeria to Kenya. However, I was there to also create content and have fun, so being me was the surest bet in getting pure contents. But then as a good motivator, he suggested I go into comedy, whether he was serious about it or not, I would think about it soon.

This piece would be incomplete without thanking Madam Kalanne Fubara and her team. We had a nice time because they made it happen.

What next After the Trip

A lot has been seen, learnt, experienced, and talked about and deciding hastily wouldn’t be a wise action. I have been doing a lot of thinking, researching, and scanning as so much was discovered in Dubai and with my amazing squad, we are certain we will not let this huge investment in us go to waste.

We are appreciative of Princewills trust — that family has a whole lot of intelligent people which is expected as the Prince is one intelligent man I have met in recent times. Ma’am Mina was a true representative of Princewills Trust and we were certainly in good hands. I look forward to many more productive years as we gradually put to work our ideas.

“Excuses will always be there for you, Opportunity won’t” – Anonymous

ALARMING EXTENT TO WHICH YOUTH  INDISCIPLINE GROWS, BY PRUDENCE KARO