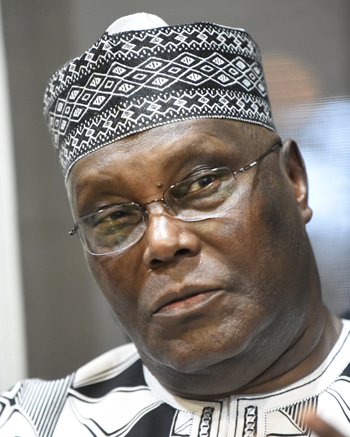 President Muhammadu Buhari has accused the presidential candidate of the Peoples Democratic Party of plotting to bring in illicit funds ahead of the 2019 election.

President Muhammadu Buhari has accused the presidential candidate of the Peoples Democratic Party of plotting to bring in illicit funds ahead of the 2019 election.

Buhari, the candidate of the All Progressives congress for the election, stated this in a statement on Sunday.

The statement, issued by the Buhari Media Organisation, raised an alarm over a grand plot by Abubakar to bring illicit funds into the country ahead of the 2019 elections.

He consequently wants the Central Bank of Nigeria and relevant security agencies, including the Nigeria Customs Service and the Economic and Financial Crimes Commission, to be on the lookout for cross border movement of large sums of dollars into the country.

The BMO said in a statement signed by its Chairman, Niyi Akinsiju, and Secretary, Cassidy Madueke, that it is as a result of the desperation to bring money stashed abroad into the country with a view to outspending the APC.

The statement said: “We have it on good authority that the PDP and its Presidential candidate are making strenuous efforts to bring in public funds stashed abroad including those from recent sales of assets in Angola which were acquired with illicit funds.

“We also know that the former Vice President has made promissory transaction commitments on a number of strategic national assets including the Nigerian National Petroleum Corporation (NNPC) and a percentage holding in the Nigeria Liquefied Natural Gas (NLNG) to a foreign syndicate.

“All these are out of desperation and as a result of his inability to raise funds from governors elected on PDP platform, many of whom are themselves locked in stiff battles for their seats.”

The group explained that the move by the PDP presidential candidate follows stringent measures put in place by the CBN and EFCC to ensure sanity in the banking sector.

This, the BMO said, is against the backdrop of how top officials of the last PDP government allegedly used some banks, especially Fidelity Bank, to move public funds to party officials in all states of the federation before the last election.

it added: “It is clear to Atiku Abubakar and PDP elements that the President Muhammadu  Buhari Administration has put in place a system that has made it difficult for the type of situation in 2015 where former Petroleum Resources Minister Diezani Alison-Madueke could warehouse $115,000,000 (One hundred and fifteen million dollars) which was then shared among party officials to influence electoral officials.

“They also know that even the EFCC is very much on the alert at local airports as seen in the manner its operatives have twice in recent times intercepted undeclared sums of money running into millions of dollars.

“So these opposition elements are now working out a more crooked way of bringing in money through the borders in order to circumvent the system before and during the February 2019 elections.”

The BMO consequently wants all relevant agencies to double their efforts to enforce provisions of the of the Money Laundering Prohibition Act, 2011 (as amended).

Atiku Replies Buhari, Says ‘You Have History Of Bringing In Looted Funds’