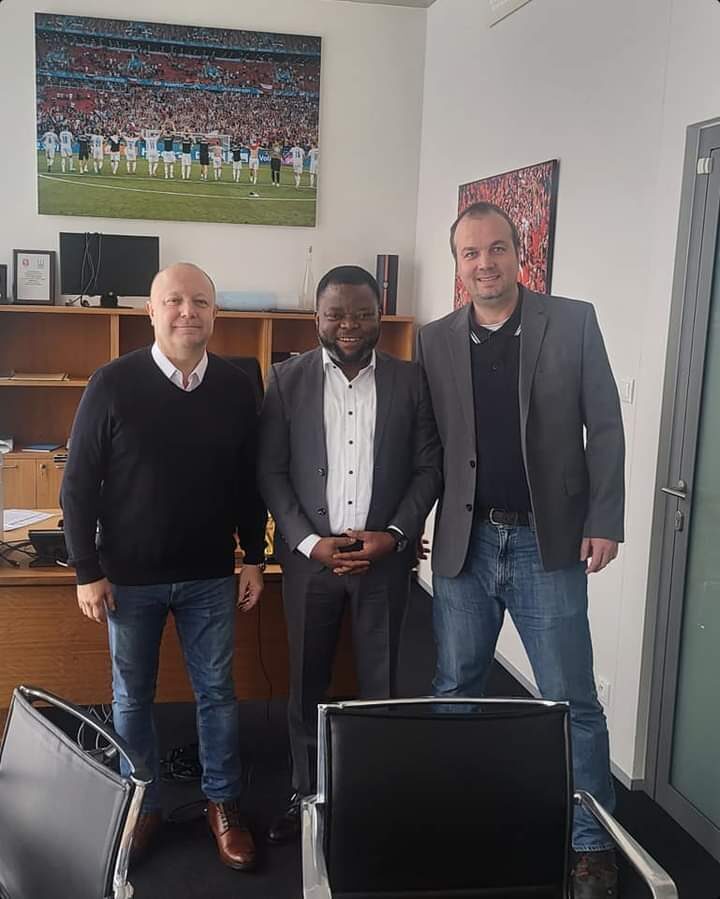 Ofehe (middle) with the Czech Football Federation President, Mr. Petr Fousek and the Vice-President Mr. Jiri Sidliak at the FA Headquarters in Prague.

Comrade Sunny Ofehe, a Netherlands-based Nigerian environmental rights, has signed a deal with Czech Football Federation for an international friendly match between the Czech U-17and U-21 and a Delta State selected side.

BIGPEN NIGERIA (www.bigpenngr.com) reports that Ofehe announced this in a statement, on Monday, saying that the deal was sealed before the New Year after he met with the Czech Football Federation President Mr. Petr Fousek and the Vice-President Mr. Jiri Sidliak at the FA Headquarters in Prague.

“We agreed to discuss further on other areas when we meet again at the next FIFA Congress holding for the first time in Africa; Kigali, Rwanda in April 2023”, he said.

Ofehe who is a governorship candidate in Delta state under the Young Progressive Party (YPP), said that he has christened the tournament “The Olu of Warri” Tournament after his recent meeting with His Royal Majesty, Ogiame Atuwatse III, The Olu of Warri in Abuja.

On why he was bringing such a tournament to Delta, Ofehe said; “It has been my passion to give our young Football talents, the opportunity to showcase their potential at European level. This of course will be a great opportunity to get the best talents in Nigeria for this international encounter.

“I have started discussions with top coaches in Nigeria on how we can screen and get these teams together for the matches. We will also get European football scouts to watch them in Prague, when they play the return games. Hopefully, some or all the boys will get their chance to play in European teams of their dreams.

He said that as a governorship candidate in the forthcoming general election, “To serve your people, you need to show capacity that will open many frontiers and this is what I bring to the table. As Governor of Delta State, we will do more for the benefit of our people and God’s name will be glorified”, he added.

Buhari’s Presidency Bears Its Fang On Obasanjo, Accuses Him Of Being Jealous