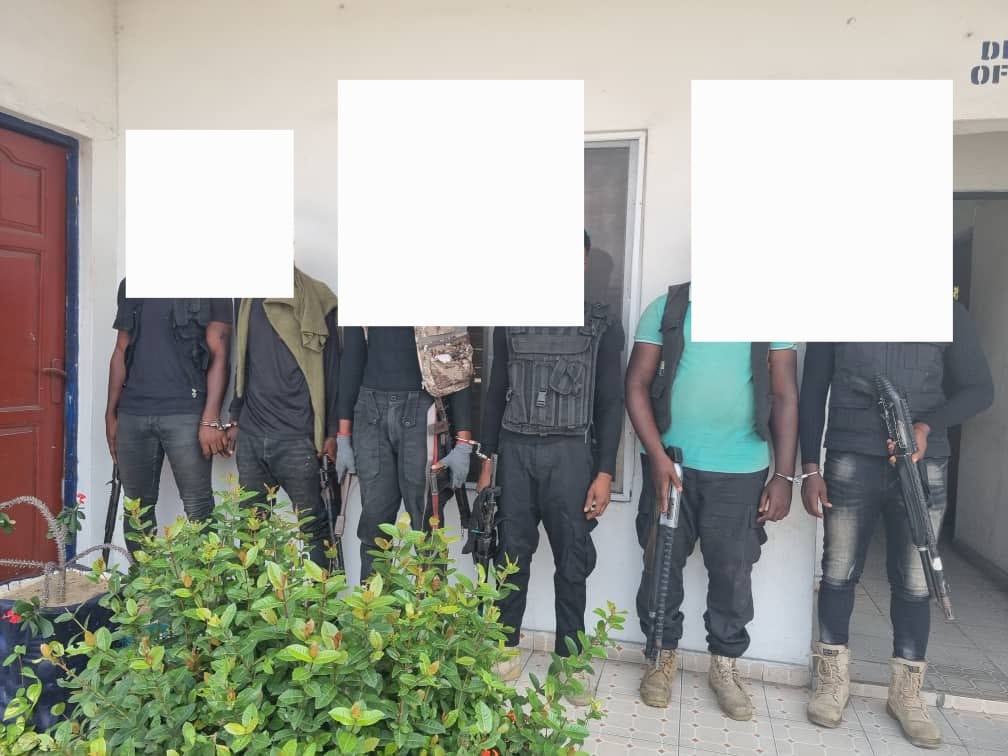 3 pump action guns, four locally made guns recovered
The Delta State Police Command, on Saturday, say it has arrested six men who disguised as members of a local vigilante group to rob and kidnap suspected victims in Ekpan community Uvwie local government area of the state.
The suspects including one Aaron Okorigwe,  27 and five others could not give reasonable account of themselves when police intercepted their operational vehicle in Ekpan where they often carry out their nefarious activities.
The suspects were apprehended on Thursday, December 15 at about 2000hrs following a tip off, according to the State Police Public Relation Officer DSP Bright Edafe who confirmed this in a statement on Saturday in Warri.
He said that police operatives attached to Ekpan Police station deployed on patrol along Jakpa Road arrested the suspects after they intercepted a Toyota Sienna space bus, ash in colour without registration number conveying six male occupants.
Edafe said that during a search conducted on the occupants of the vehicle, three (03) pump action guns,  four (04) locally made guns, one (01) long axe, seven (07) expended cartridges, nine (09) live cartridges,  native charms,  three (03) cutlasses, two (02) number plates were recovered.
“The suspects, Aaron Okorigwe ‘m’ aged 27yrs and five others could not give reasonable account of themselves, were taken into custody”, he disclosed.
Investigation later revealed that they were hoodlums who operates under the guise of being members of hunters group from Ovwian Aladja, DSP Edafe said.
He said that the suspects usually sneaked into Ekpan Community in a Sienna vehicle, kidnap unsuspecting victims, after robbing them and then run to hibernate in Ovwian Aladja.
“Following these findings, on 16/12/2022, the DPO invited three victims (names withheld), all of whom were at various times victims of armed robberies, and kidnappings in the area, and placed the suspects on identification parade, the victims identified the suspects as the syndicate that robbed and kidnapped them”, he added.
He said that further investigation is ongoing on the incident.
Related Topics:
Up Next