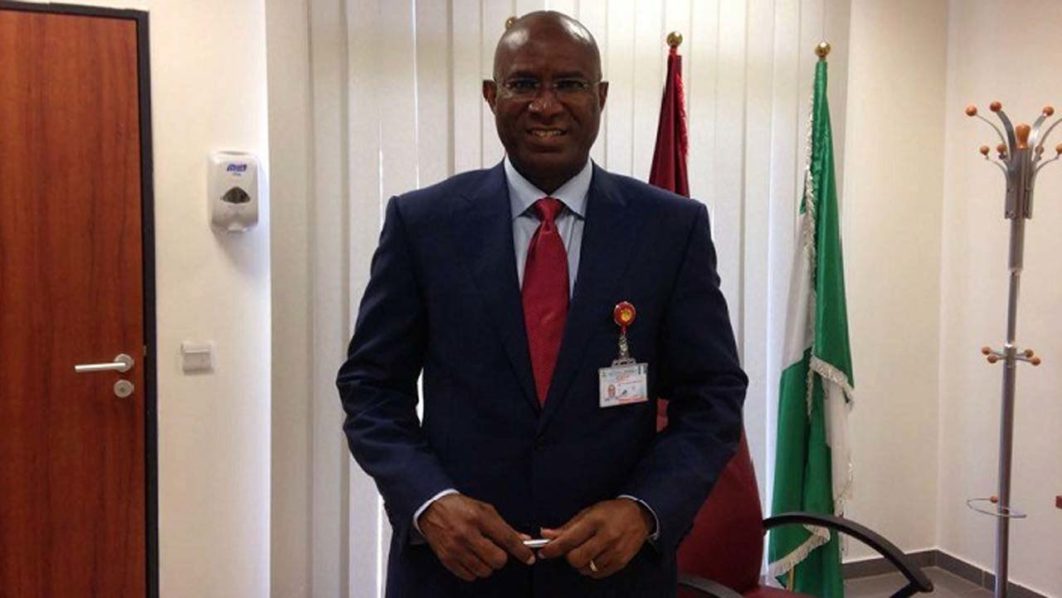 Delta State Commissioner for Information, Mr Charles Aniagwu has taken a swipe at the Deputy President of the Senate, Ovie Omo-Agege over his seething attacks on Governor Ifeanyi Okowa after his emergence as Vice Presidential candidate of the Peoples Democratic Party (PDP).

www.bigpenngr.com reported that Omo-Agege had few days ago joined the fray of those who claimed that Okowa betrayed Southern Nigeria by accepting to be running mate to Alhaji Atiku Abubakar.

Speaking at the news conference in Asaba, the state capital, Aniagwu taunted Omo-Agege and his campaign organisation for lacking campaign content in Delta, saying instead of engaging in what he intends to do if elected, he has resorted to shadow chasing around the state.

“We read in some quarters of the media that he is alleging that Okowa betrayed Southern Nigeria by accepting to be running mate to Alhaji Atiku Abubakar.

“The quest of the Deputy President of the Senate to govern our state is within his constitutional rights to aspire and we do not begrudge him just as it is the right of every other Deltan to want to contribute to the development of the state.

“But you will recall that we told him to tell Deltans what he is going to bring on board. So for Ima Niboro to constantly progress in error is to say the least unbecoming of some persons who think he wants to govern a sate as cosmopolitan and as advanced as Delta State.

“Those rules define how an aspirant can emerge a standard bearer. You cannot be in Leventis and determine how they are paying salaries in UAC. It does not follow the same rule,”

Aniagwu, also berated the Director of Communications of the Ovie Omo-Agege campaign organisation, describing him as ‘a failed presidential spokesman’ who was sacked in 2011 for failure.

“Our brother, Ima Niboro who couldn’t help his former principal, the former president of Nigeria to canvass what the man was doing between 2010 and 2011 which is why he was replaced when the man won election.

“If he was doing so well am not too sure if he would have been replaced then as presidential spokesman so I wonder why Senator Omo-Agege would want to elevate a man who failed woefully in projecting his boss.

“He is already failing again because I have not read anywhere he has put forward what Senator Omo-Agege intends to do if elected as governor and I think that should have been his responsibility.

“Betrayal of who? The PDP as a political party met at the NEC level and resolved that given the circumstances of the party in opposition that they were going to leave the ticket of the presidency open to everybody to contest.

“Nobody kicked against that as both Northerners and Southerners contested but somebody won in this case Former Vice-President, His Excellency, Atiku Abubakar won fair and square creditably.

“Delegates of the party chose him from across the country and by the provisions of our laws once you win and you become a presidential candidate, your candidacy cannot be validated until you nominate a running mate for that ticket to be complete,”

Aniagwu further averred that leaders of the party and the flag-bearer examined a whole number of persons in the southern part of the country and found our governor, Senator Dr Ifeanyi Okowa very well qualified to be able to bring a whole lot of value to that ticket.

“The Vice-Presidential ticket is not a position of contest, Okowa didn’t buy form to contest for Vice President.

“If Omo-Agege and his campaign organisation do not have what to tell Deltans as to what they are bringing to the table, they should leave Senator Okowa alone.

“We know they are already intimidated by the rising profile of Senator Okowa. Okowa’s selection as Vice-Presidential candidate is a product of the appreciable progress and the many milestones we have achieved in the last seven years,” he added.

He, however said that the PDP Presidential Candidate, Alhaji Atiku Abubakar and his running mate, Senator Ifeanyi Okowa for the 2023 general election were focused on recovering Nigeria from the deep mess created by the seven years of rudderless leadership of the All Progressives Congress, APC.

He said that the Atiku-Okowa ticket is a ticket for recovery aimed at bringing Nigeria back to winning ways, uniting the country and giving jobs back to the youths.

He stressed that the party was devoted to building infrastructure which had suffered abysmally on account of the APC government not understanding what development was all about.

Flanked by the Chief Press Secretary to the Governor, Olisa Ifeajika, the Information Commissioner remarked that “the honour done to the governor is not for the governor alone but the entire Southern Nigeria and the rest of the country.

“The Atiku-Okowa ticket is a ticket that is going to restore our country to become a much more secured country and to restore the economy of the nation.

“They both understand economic issues and the need to bring in many persons on board irrespective of their political persuasions.

“The Atiku-Okowa ticket is already moving because while they are busy looking for a place holder, the PDP already have its candidate.

“INEC gave the timetable at the same time, while others are still searching for running mates, the PDP has shown that they are ready because they understand the issues,” he said.

He urged the opposition to stop talking about the N150 billion in isolation and also be concerned about the projects the funds were earmarked for, adding that “until the refunds starts coming in, we will not proceed to approach the bank.”

On the alleged N25 billion naira loan, Aniagwu mocked the APC for lacking knowledge of governance, adding that the Central Bank of Nigeria (CBN) has assisted a number of persons across sectors.

“The role of the state government is to guarantee the farmers and to assure the CBN that the farmers are credible enough to pay back at the appropriate time.

“To ensure that the individuals the funds would be given to will be able to use it judiciously for the CBN to get back its funds.

“Delta State Government being a responsible government decided to guarantee our farmers so that the CBN can make the funds available for the farmers to increase their yield.

“How does that become a wrong decision of government? The fund is coming from CBN, they only need the state to have a buy-in to agree that once the money gets to the farmers it would be used for the purpose it was meant for.

“Is the APC in Delta expecting that we will keep quiet because they don’t understand governance and allow the funds to go to other states and farmers in those states would be making progress and ours will have to fold their hands?