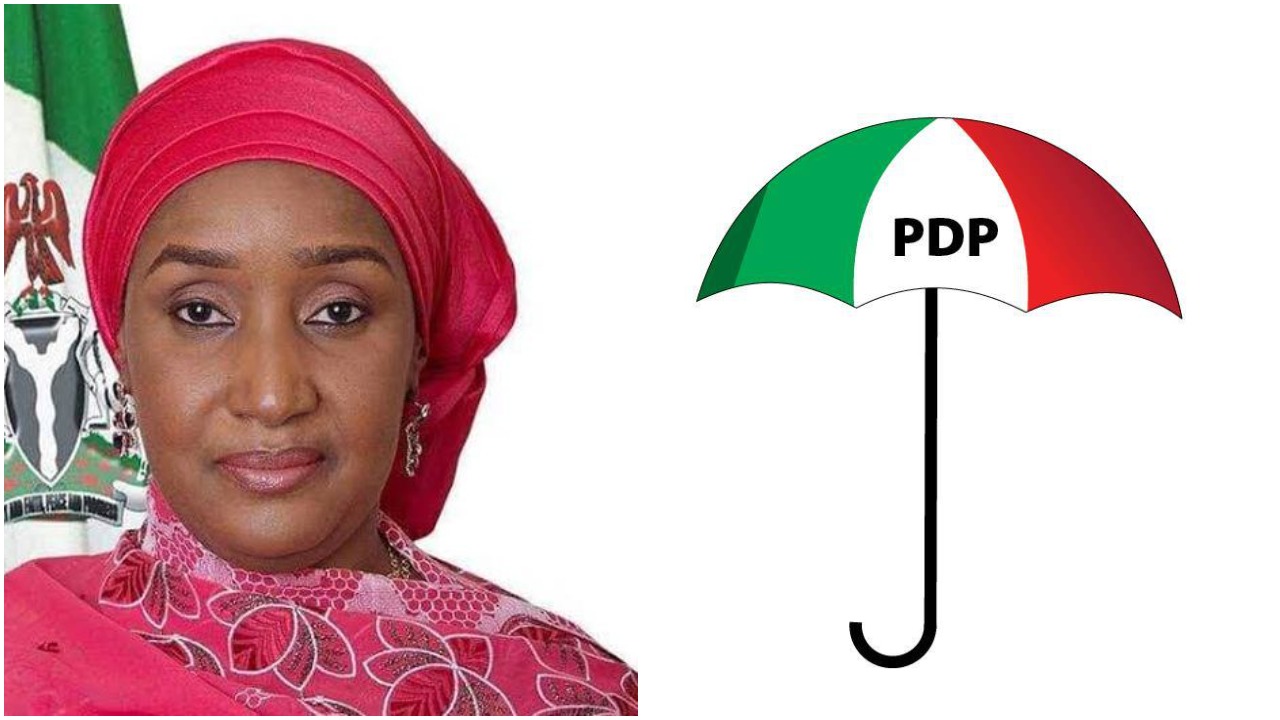 The Peoples Democratic Party (PDP) has alleged plot by those it termed indicted federal government officials to use the invasion of CACOVID palliative warehouses to escape investigation into the reported stealing and criminal diversion of funds and palliatives provided by the Federal Government to cushion the effect of the COVID-19 pandemic.

“The PDP is appalled by the scandalous attempt by the Minister of Humanitarian Affairs, Disaster Management and Social Development, Sadiya Umar Farouq, to create an impression that the CACOVID palliatives besieged in the aftermath of the EndSARS protest were the same federal government palliatives for which she is required to give account”, the party said in a statement by its national publicity secretary, Kola Ologbondiyan on Sunday.
The PDP told the minister that “such infantile antics cannot sway Nigerians, as the public is already aware that CACOVID palliatives came from donations from wells meaning individuals and organizations which is completely different from the N500 billion voted by the federal government, which has not been accounted for.
ALSO READ: COVID-19: Govs Beg Buhari For Debts Reliefs, ‘Palliatives’
“If anything, this attempt by the minister to muddle-up issues and confuse Nigerians only goes to validate allegations of stealing and diversion of funds and palliatives provided by the Federal Government and placed under her purview.
“Of course, the CACOVID palliatives has nothing to do with the alleged stealing and diversion of funds in the cash disbursement of N20,000 to undocumented beneficiaries leading to widespread outcry by Nigerians that bulk of the money may have been diverted.
“The embattled minister has not explained the reason for the obvious circumventing of statutory public finance report system and appropriate documentations by the Central Bank of Nigeria (CBN), leading to the alleged diversion of funds to private purses.
“Also, the CACOVID palliatives have nothing to do with the billions of naira claimed to have been spent on school feeding at a time the schools were shut and school children were in their respective homes in different locations across the country.
“It is revealing to state that our party had earlier gotten winds of allegations in the public space that some indicted federal officials compromised arrangements at CACOVID warehouses to trigger an invasion by agitating Nigerians, as a decoy to frustrate investigation into the alleged stealing and diverting of federal government palliatives by government officials.
“Indeed, the rush for self-exoneration by the minister as well as her forgiveness showboating, apparently in an attempt to posture a foreclosure of an investigation into the handling of Federal Government palliative funds, goes to validate the allegations.
But Nigerians cannot be swayed by such antics as they hugely smacks of guilt and desperation to evade investigation and conceal corruption.
ALSO READ: JUST IN: Three Reportedly Killed, Many Injured In Enugu As Soldiers, Police Open Fire On COVID-19 Palliative Looters
“Moreover, it is evident that the besieging of the CACOVID warehouses was further inflamed by bottled-up anger and frustration over the corruption that characterized the handling of Federal Government palliative funds by the Minister, who now postures for foreclosure of investigation into the manifest atrocities in her ministry.
“Our party holds that this particular attempt to cover corruption places a huge burden on the Buhari-led administration and we call on Mr. President to come clean on the handling of Federal Government funding on COVID-19.
“The Minister of Humanitarian Affairs, Disaster Management and Social Development should therefore end her unnecessary showboating and self-exoneration and get ready to give account of the allegedly diverted billions of naira provided by the Federal Government for COVID-19 palliatives instead of seeking to hide under CACOVID palliatives looting.
“The PDP standing with millions of deprived Nigerians demands that President Muhammadu Buhari immediately order an open and independent public enquiry into the handling of the funds released by the Federal Government as COVID-19 intervention fund.
ALSO READ: CACOVID Orders 400,000 COVID-19 Tests Kits To Shore Up Nigeria’s Testing Capacity
“The Minister of Humanitarian Affairs should give account of how much was released to her, the specific purchases, with details of contractors; details of distribution of palliatives and agents in all states; as well as details of bank withdrawals and beneficiaries of her N20,000 disbursements.
“Nobody should hide under CACOVID to foreclose investigations into the stealing of funds meant for the poor and vulnerable in our country.
“The PDP however restates our call for calm but urges the Federal Government to end such provocative antics being played by its officials to cover corruption”.
Related Topics:CACOVIDKola OlogbondiyanPeoples Democratic Party (PDP)Sadiya UMAR FAROUQ
Up Next