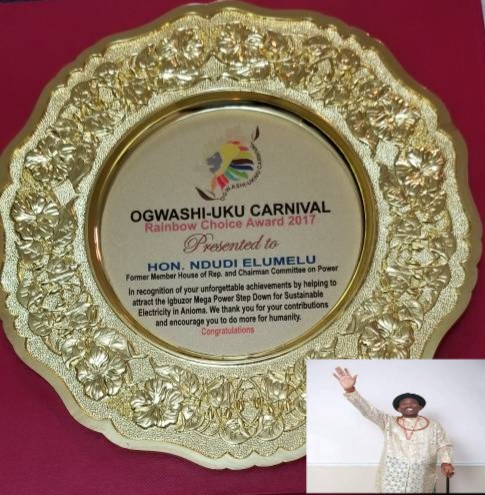 Former member representing the Aniocha/Oshimili Federal Constituency at the House of Representatives, Hon Ndudi Elumelu has been honoured for championing rural electrification project in Nigeria.

Elumelu received the 2017 Rainbow award in Delta State for his developmental efforts in lighting up the rural areas, especially his outstanding contributions to the Aniocha/Oshimili Frderal constituency, and his attraction of the Ibusa Mega Power Step Down for sustainable development.

The lawmaker, according to the organisers of the Annual Ogwasi-Uku Carnival and Rainbow Choice Award for 2017, was also honoured for attracting health facilities that improved the economic conditions of the people of the area.

“This Rainbow Award, 2017, is presented to you in recognition of your unforgettable achievements by helping to attract the Ibusa Mega Power Step Down for Sustainable Electricity in Anioma,” the organisers said during the award ceremony, held at Ogwashi Uku, headquartes of Aniocha South LGA, Delta State, on Monday December 26, 2017.

The former legislator, who was also the chairman of the Federal House of Representatives Committee on Power, as well as Health in consecutive terms, has been accorded with the unrivaled recognition as the architect of the improved power service within the Aniocha/Oshimili axis of the state, with the construction of the 132/33Kva Step Down at Ibusa.

Responding on behalf of the lawmaker, the Director General, Movement for Democratic Emancipation, a body driving Hon. Elumelu’s Political concern, Mr Chigbu Anene said that the recognition was well deserved, for the fact that the attraction of the project has changed the face of the Federal Constituency, which for years was in darkness.

“The Award is a well deserved one. It recognises his strives to bring down the step down transmission line to his constituency and other developmental projects like the State of the Art Hospital at Onitcha-Uku, during his time as a representative of the people  at the National Assembly.

Today that singular effort has changed the economic fortune of the constituency”, Chief Anene said.