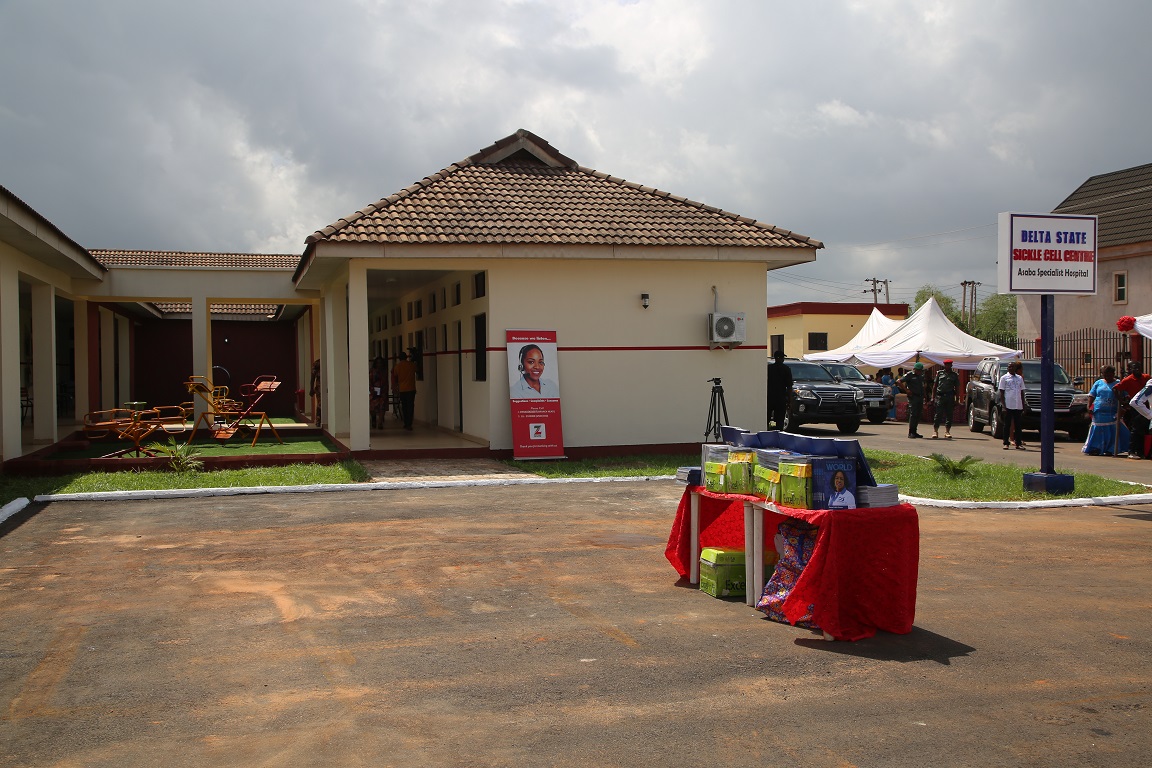 05 Initiative, a non-governmental organisation founded by the wife of the Governor of Delta State, Dame Edith Okowa has donated a well equipped Sickle Cell Referral Centre to the Delta State Government.

Commissioning the Centre located at the Federal Medical Centre Asaba, the state capital, Governor Ifeanyi Okowa called on Nigerians to always impact positively on the life of one person as such will engender the spirit of brotherliness among the people.

According to the Governor, “I am glad that the 05 Initiative was founded and committed to helping one individual at a time. As Nigerians, if we impact on the life of one person positively, that person will go ahead to impact on the life of another person and within a short period, we will have a country where the people will be willing at all times to help one another.”

“This commissioning exercise is coinciding with the birthday celebration of my wife, while I say, happy birthday to her, I am glad that every year she celebrates her birthday touching the lives of other people,” the governor said.

Governor Okowa used the occasion to disclose that at his 60th birthday which will be coming up in the month of July, 2019 (next month), he will be celebrating with the less privileged.

While thanking his wife for having the vision to assist people with sickle cell disorder and assist the hopeless in the society, Governor Okowa thanked donors to 05 Initiative, stating that the NGO was strictly driven by donations from individuals and agencies.

Dame Okowa in an address at the event said, “with the addition of this centre, it brings to 13 the total number of Sickle Cell Clinics established by the 05 Initiative in its relatively short history; the other twelve clinics are located at Ughelli, Sapele, Oleh, Kwale, Eku, Patani, Koko, Otu-Jeremi, Agbor, Orerokpe, Issele-Uku and Umunede.”

“Every one of these clinics is fitted with modern equipment, quality furniture, and manned by skilled and knowledgeable personnel because, as some of us here may be aware, sickle cell patients face peculiar health challenges including episodes of pain, frequent infections, delayed growth, and vision problem not to mention the social stigma associated with the disorder in our environment,” she stated, adding, “I am not expecting you to change the world; all I ask is that you change the world of one person; do that and you would have accomplished a world of good.”

Chairman of the occasion, Prof. Epiphany Azinge (SAN) had in an opening speech scored 05 Initiatives high in meeting with its vision, stating, “activities of 05 initiative has blossomed tremendously; the scorecard is impressive; 05 Initiatives is giving hope to the hopeless.”

“This Sickle Cell Centre is the second of its kind in Nigeria and I congratulate and commend the founder of 05 initiative, Dame Okowa for her commitment to leaving a legacy that will endure for all time,” Prof. Azinge said, adding, “this will reduce high mortality rate in persons dealing with sickle cell disorder and I urge every good spirited individual and agencies to sponsor the programme.”

Director General of 05 Initiative, Mrs Kevwe Agas said in a welcome address that the NGO was established to assist the needy in the society and urged people to know their genotype.

Wives of the Governor of Edo State and her Akwa Ibom State counterpart, Mrs Betsy Obaseki and Mrs Martha Udom respectively were among dignitaries who attended the event.