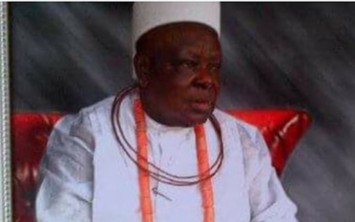 The Governor, in a condolence statement by his Chief Press Secretary, Charles Aniagwu in Asaba on Thursday, recalled Chief Ibori’s active and remarkable role in the peace and economic development of Oghara Kingdom.

He noted that the deceased was an exemplary leader and father who was highly revered and respected across the State because of his commitment to peace and conflict resolution.

He added that Chief Ibori served his people selflessly, stressing “that Chief Ibori’s passion for an egalitarian society was worthy of emulation, recalling that until his death, he had been an active community leader in Oghara Kingdom.

While paying tribute to Chief Ibori’s immeasurable contributions towards the advancement of Oghara Kingdom, Governor Okowa said the people of Oghara Kingdom would forever remember him and extol his memories.

The Governor joins them in mourning the late patriot and elderstatesman who has left behind an impressive legacy of discipline, honesty, integrity and hard work in community service.

“On behalf of my family, the Government and people of Delta State, I extend my heartfelt condolences to our leader, Chief James Ibori, Immediate past Governor, Dr Governor Emmanuel Uduaghan, the entire Ibori family, the Ovie of Oghara Kingdom, HRM Noble Eshemitan, Uku-Oghara-Na-Me, Orefe III, on the passage of High Chief William Ibori, “the Unugbrogodo of Oghara Kingdom” an illustrious and dedicated elder statesman.

The Governor urges the Ibori family, friends and associates to honour his memory by continually upholding the values and principles which he lived for and never stopped fighting for till his death.

Governor Okowa prays that Almighty God will comfort all who mourn him and grant his soul eternal peace.