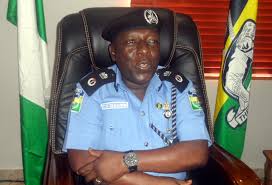 A notorious kidnapper and a political thug who has being on police wanted list for his allegedly nefarious activities has been arrested in Warri, Delta State.

The suspect simply identified as Anthony Ogbalor, alias Dracula, a ring leader of suspected armed robbery and kidnapping gang was apprehended by a crack team of police from ‘B’ Division Police station in Warri.

BigPen Online gathered that Dracula who had been arrested in several occasions had often boasted to police officers that he would always get off the hooks through the influence of some political guns who allegedly used him for political thuggery.

Sources revealed that the suspect alongside other members of his gang had boasted that they would be released by the politicians who would need his services for the forthcoming local government elections and 2019 general elections.

Our source disclosed that the said Dracula, has linked with a serving commissioner in the state who is mounting pressure on the police to release the suspect.

BigPen Online gathered that the bubble got burst for the suspect and other members of his gang on Thursday 28, December, 2017 after a member of the gang was trailed about 7:30pm in a snatched Toyota Corolla car with reg. no EPE 874 DQ, navy blue color driving toward Enerhen road in Warri.

Giving details account of how the suspect was eventually apprehended, the source said: “On getting to a particular spot, detectives swooped on them and on approaching to a point near Enerhen Village, the occupants who suspected they were being trailed, opened fire on the police which was repelled.

“In the process, they jumped out of the car and ran away with bullet wounds. The vehicle was recovered and on being searched, two cut to size locally made guns and 4 live cartridges and a car key with remote was recovered.

The source disclosed that, “Based on intelligence, one Kesiena Henry of Isoko town was later arrested with a grey coloured Honda Accord with reg. no. GBJ 419 FQ which was snatched at Ozoro recently.

The suspect confessed to be a member of the gang that kidnapped one Mrs. Egodo and her two children at Kosini junction.

He also piloted the gang that killed the former Area Commander Ughelli as well as the gang that snatched a black Prado Jeep at Ovwian Aladja belonging to Chief Ayiri Emami.

The source further hinted that the suspect confessed to belonging to the gang that killed SUPOL German, who was SARS Coordinator in Ughelli late in 2017.

Kesiena Henry exposed all the activities of other suspects which led to the arrest of one Luckyson Egavers, Akpomeda Williams, Egbe Break and the gangs’ kingpin, Anthony Ogbalor alias Dracula.

He also confessed to have collected the sum of M1million as his own share of the N3.2million ransom taken from victim’s family.

State Commissioner for Police, Mr Zanna Ibrahim in a statement to BigPen Online on Saturday confirmed the arrest of the suspects for offence of conspiracy, kidnapping and armed robbery.

According to him, one Pastor Frank Otomi 55yrs of Efffurun, Mrs. Mofe Otomi, 42yrs both of Effurun and Mrs. Regina Ani, 38yrs, were victims of the recent escapees of the suspects whose names were given as Henry Okejere Kessena ‘m’, 30yrs of No. 234   Warri-Sapele Road, Warri, Anthony Ogbalor, A.K.A “Dracular” ‘m’, 57yrs of No. 1 Omodigbo Str., Otoide Community, Isoko North LGA, Delta State, Kosin Henry Aka “Capoun”, 36yrs of No. 134 Eboh-Iyede Community, Isoko North LGA, Delta State, as well as Kenneth Onome ‘m’, 34yrs of Stadium Road,Ughelli

He said that the suspects on  23/6/2017, at about 1930hrs, had blocked their victims who were driving in a Hyundai Jeep with Reg. No. LSD 344 ER along DSC Round-About, Warri, and whisked away to an unknown destination with the said Jeep.

However, on 23/12/2017, while acting on available intelligence, a team of Operatives attached to ‘B’ Division, Warri, led by the Divisional Police Officer (DPO), CSP. Aniete Eyoh arrested one Henry Okejere Kesena ‘m’, a notorious kidnapper who has been on the watch list of this Command.

“His arrest and confession led to the arrest of the other suspects who equally confessed to the crime and their involvement in several kidnap incidents, including the murder of the late Police Area Commander, Ughelli, ACP. Usman Ndanbobo”, the Commissioner of Police said.

He however said that further investigation is ongoing on the matter.