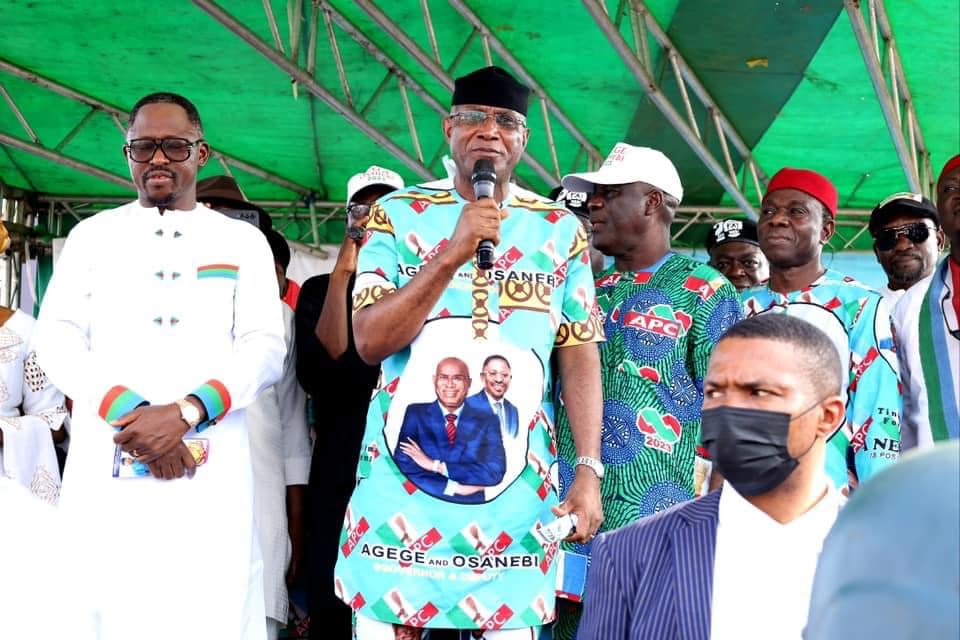 The people of Ndokwa East local government area have been assured by Delta APC gubernatorial candidate and Deputy President of the Senate, Senator Ovie Omo-Agege, that the proposed Federal University of Agriculture will undoubtedly be established in Aboh.

Senator Omo-Agege gave the assurance during a campaign rally at Aboh town, in continuation of the APC ward to ward campaigns, on Saturday, December 3.

He disclosed that the Senate and the House of Representatives had approved the bill establishing the federal university of agriculture, Aboh, and that President Muhammadu Buhari was now required to sign it.

According to a statement by Ima Niboro, Director, Communications and Media Strategy, Delta APC Campaign Council, Omo-Agege lamented the neglect of Ndokwa East local government area by the Governor Ifeanyi Okowa led PDP administration and promised to address the issue when elected governor.

“All the wickedness of Okowa and his administration will stop on election day. When I see your sufferings, the criminal neglect and pains imposed on you by Okowa, I shed tears. I know how much you contribute to the state and nation’s economy yet when Okowa wants to make decisions on infrastructure development, he neglects Ndokwa East.

“In the entire Ndokwa nation, there is no higher institution because of his wickedness and hatred for the Ndokwa people. Even when he established three new universities in Delta State, he did not consider the Ndokwa nation.

“Let me assure you that the days  of your suffering are over. We will ensure that the Federal University of Agriculture, and other amenities, are established here. My administration will bring a smile to your faces ,”Omo-Agege said.

Earlier, the Ndokwa East local government chairman of APC, Chief Barr Austin Ogbolu,  thanked Senator Omo-Agege for his effort to establish the Federal University of Agriculture, stating that the mammoth crowd at the rally was an expression of the people’s appreciation for the feat, and pledged to reciprocate the gesture at the polls.

Also speaking, the local government APC candidate for the Delta State House of Assembly, Hon Tony Amaechi Ndanenu , said the 2023 general elections “is an opportunity to correct everything wrong that Okowa and PDP have done to us,” and assured of total support for all candidates of the APC at the polls.

At Ashaka and Ossisa, Senator Omo-Agege once again thanked the people of Ndokwa East for their contribution to the development of Nigeria through oil and gas production.

“This local government is ours, so we have no need to campaign here. Thanks for what you have done, and for what you’re about to do. We know the contributions of Ndokwa East to the economy of Nigeria. This is the time to reject PDP outright. You have done a lot for Nigeria and Delta State. It is time to reap the benefits of your sacrifice,” he said.

How Fake Italian Engineer Was Punished To Six Months In Prison In Abuja For €20,000 Scam