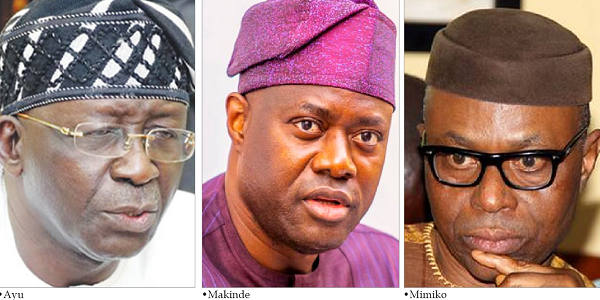 It appears that the crisis affecting the opposition Peoples Democratic Party (PDP) has gotten worse.

This is because the decision of the party’s chapters in Ondo and Osun States to disown the “Ayu Must Go” protest movement being spearheaded by Governor Seyi Makinde of Oyo State is causing new unease within the troubled opposition party, according to TheNation.

The arrow heads of the Ayu Must Go campaign in the South West zone of the Peoples Democratic Party (PDP) appear to be losing the plot after the party’s chapters in Ogun, Osun and Ondo states declared their support for the embattled National Chairman of the party, Dr. Iyorchia Ayu and the presidential candidate, Alhaji Atiku Abubakar.

That leaves Lagos, Ekiti and Oyo as the only states in the zone still hanging on to the campaign.

Former Deputy National Chairman of the party, Chief Olabode George, insisted yesterday that there was no way out for Ayu than to resign.

He said the PDP constitution should even be suspended if need be ahead of the presidential election campaign otherwise the party would have a tough time convincing the South West in particular to vote for its candidate.

The Nation gathered yesterday that some PDP chieftains in the South West are forging ahead with their plan to replace Ayu with one of their own.

2023: Plot To Kick Out Ayu Thickens As More PDP Leaders Join The Fray

But the Ondo State chapter of the party yesterday passed a vote of confidence in the national chairman, insisting that its priority for now was to ensure victory for its candidate in next year’s polls.

The decision came on the heels of a statement by the Osun State chapter disclaiming the Wednesday statement by Makinde that the South West zone of the party wanted Ayu out.

It said there was no time the PDP in the South West met and took any such decision.

The Ondo State PDP in a statement through its Publicity Secretary, Kennedy Ikantu Peretei, said it was not a party to the plot to remove Ayu from office being championed in the zone by Makinde and Mimiko as the priority of the party in the state is to ensure victory for the PDP in the next election.

“The Peoples Democratic Party (PDP) Ondo State Chapter is committed to victory at the general elections in 2023,” he said.

He added: “Against this background, Ondo State PDP aligns itself completely with the 97th National Executive Committee (NEC) meeting Resolutions which passed a vote of confidence on Senator Iyorchia Ayu as National Chairman and the National Working Committee (NWC) of our great party.

“We unconditionally support the presidential candidate of our party, Alhaji Atiku Abubakar, who possesses the experience and capacity to lead Nigeria to the destination of our dreams. Our focus and priority at this critical time is victory at the polls. And we shall commit all our energies to ensuring victory.”

On its part, the Osun State chapter said through its caretaker chairman, Dr. Akindele Adekunle, that it was “not part of any revolt against the national leadership of the PDP.”

Continuing, Adekunle said: “We remain guided and loyal to the PDP Constitution which stipulates processes for leadership election and removal. As a party with a democratic tradition, we see no justification for any anti-democratic agitation to torpedo the ship of the party at this very critical stage of national campaigns and pre-election preparation.

“Dr Ayu, who was duly elected at a properly constituted National Convention with a four-year mandate, also has the vote of confidence of the party’s National Executive Committee, the party’s highest decision-making organ.

“Our party Chairman is a principled leader whose integrity is second to none. We consequently disagree with any move to undermine the office of the National Chairman.

“We also use this medium too, on behalf of our teeming members, to apologise to members of the PDP National Working Committee and other leaders over the embarrassment the resignation call may have caused them.

“The occasion was a solemn one where party loyalists gathered to host our national leaders and demonstrate our preparedness for the task ahead. It was not an avenue for factional rhetoric.

“While reaffirming our passion to mobilise for the PDP’s victory in the forthcoming general election, we restate our resolve to embrace all that is constitutional, unifying, and contributory to the success of the party and its leadership.

“We stand to be counted all the time as agents of electoral success without tolerance for estranged antics.”

The Ogun State chapter yesterday joined the fray on the side of Ayu, saying calls for his resignation now were ill timed.

Publicity Secretary, Akinloye Bankole, dissociated the chapter from Makinde’s pronouncement and declared that “there was no prior meeting or agreement relating to such pronouncement.”

“Ogun PDP strongly insists that the sanctity of the party constitution cannot be slaughtered on the altar of narrow individuals’ whims and caprices,” Bankole pointed out.

George: PDP can suspend constitution to get rid of Ayu

However, Chief Olabode George insisted yesterday that Ayu had no choice but to quit as national chairman in the overall interest of the PDP.

He said the party could even suspend its constitution to pave the way for the exit of the chairman and his replacement by a southerner the same way it discarded its policy of rotation of the presidency between the north and the south.

He was responding to the recent statement by Atiku Abubakar that the only way Ayu could leave now was to amend the PDP constitution.

George, in an interview on Arise Television, said: ““Our party constitution explicitly states that there would be zoning and rotation of elective offices and party offices. If we had stuck rigidly to that, there was no chance for Atiku to have emerged.

(This story contains information from The Nation)