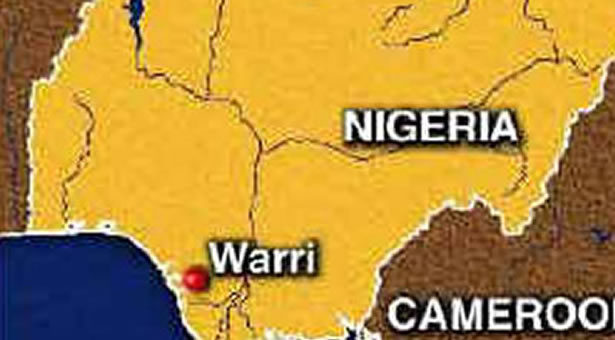 Goods worth hundreds of millions of naira were lost even as three persons are reported hospitalized as fire gutted shops, shanties at the miller waterside near the old Nigerian Port Authority (NPA) yard in Warri, the commercial nerve centre of Delta state.

www.bigpenngr.com report that the fire which broke out Wednesday night around 10;pm burned till Thursday morning around 2: am when firefighters drafted to the scene at the wee hours were able to quelled it.

Local sources said that several shops and makeshift houses around the Warri Central Hospital, opposite the former Palnalpina company were razed by the fire which was triggered from a gas cooker but reportedly fueled by activities of illegal oil bunkerers who stored gallons and drums of illegally refined diesel and fuel in that part of the metropolis.

Some of the traders who lost their goods running into millions of naira claimed that the fire started from a makeshift house of a woman who was cooking with a gas cooker but the flames spread through the help of fuel and diesel stored in multiple sacks, gallons and drums by those who plied illegal bunkering trade in some shops and shanties near the old Warri port.

A trader who gave his name as Ebi said that they lost goods worth thousands of  naira in the fire.  “We don’t really stay here but we have a shop which was razed to rumble.

“We were called around 10 in the night that the place is on fire so we rushed down but before we got here everywhere was with smoke. People were just running helter shelter trying to salvage their goods and wares but it was difficult.

“I learnt that in the course of this confusion  and being that it was dead night, about three persons sustained injuries as they ran to evacuate some of their things”, he added.

Chairman of Warri South Council, Dr Michael Tidi who was contacted on phone, said that firefighters were swiftly deployed to the scene but the fire was overwhelming and spread quickly because most of the houses around were built on planks.

He said that though information about the fire was still sketchy, community leaders in the area alleged that an occupant of one of the makeshift houses was cooking with a gas cooker from where they fire started and spread to other areas.

Tidi said that the council would liaison with the community leaders in the area to unravel the cause of the fire, saying he had already intimated the state governor, Dr Ifeanyi Okowa and the commissioner incharge of the Bureau of Special Duties, Hon. Johnbull Edema.

“I have already escalated the incident to the appropriate authorities and “by that I mean His Excellency, The Governor as at last night (Wednesday). And of course today, I put a call through to the Honorable commissioner incharge of the Bureau of Special Duties, Hon. Johnbull Edema whose responsibility it is to reach out to the victims”.

He said that the local government council would work i tandem with the state government and the Bureau of Special Duties to cushion the effect of the losses suffered by the traders and residents.

The council boss confirmed that about three persons sustained various degree of injuries from the fire while trying to evacuate their wares.

“No report of death and no part of NPA was gutted by the fire contrary to news being spread around. Don’t forget, most of the houses there are makeshifts and shops but some of the people actually sleep in their shops. Thank God no life was lost but people means of livelihood went down the dra

“I must commend the efforts of the Delta State fire service. They responded swiftly to the call that I made and of course the security agents were on ground”.