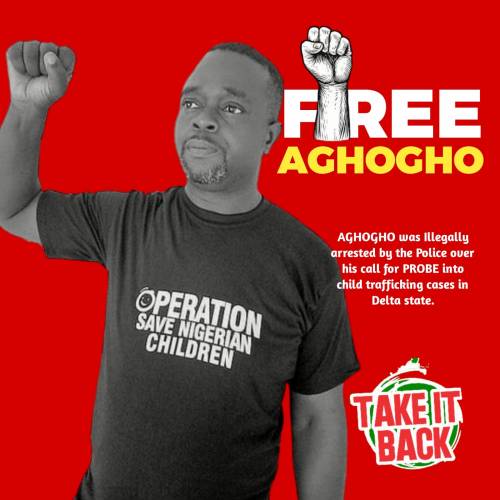 A Federal High Court in Warri has fixed July 21, 2022, as the date to hear the bail application of the Delta State Take-It-Back Coordinator, Ighorhiohwunu Aghogho from prison.

Justice Okon Abang on Friday fixed the date for the bail application.

According to report in Sahara Reporters, lawyers supported by Legal Aid, Citizens Gravel Foundation for Social Justice had filed the bail application for the release of the activist, Aghogho.

In the suit numbered FHC/WR/CS/51/2022, the lawyers demanded the release of Aghogho from Ogwashi-Uku Correctional Centre (Prison).

The court document read, “Grounds for the Relief(s) sought are (1) On or about the 8th day of June 2022, the Applicant was remanded at Ogwashi-Uku Correctional Centre (Prison) by the Order of P. U. Nsolo (Mrs) of the Magistrate Court 1 sitting at Asaba on the guise of holding charge pursuant to sections 293 and 294 of the Administration of Criminal Justice Law (ACJL) of Delta State. (2) By the said sections of the ACJL, the order made on or about 8/6/2022 has a lifespan of 14 days and was unprofessionally extended to 8/6/2022 by P.U Nsolo (Mrs) on 24/6/2022 without the court sitting.

“(3) The Order has expired since on 24/6/2022 and there is no valid order of court extending the remand order since the Court did not sit. (4) That to date, the Delta State Director of Public Prosecution (DPP), Mrs Efe Odogwu Jesin Odogwu has failed to and /or file any charge against the Applicant (Aghogho) if she wishes to prosecute the Applicant.

“(5) This Court has the power to release the Applicant on the circumstance on bail pending the DPP advice or prosecution (if any). (6) The applicant is an asthmatic patient and needs to be released so he can properly treat himself. (7) The applicant is innocent of the offence with which he is being accused of and ought to be granted bail unconditionally. The applicant is ready to stand trial at any time if called upon to do so.”

On June 6, 2022, the activist was illegally arrested and detained by the police in the state over his calls for a probe into child-trafficking cases in the state.

He had also protested against the lack of police vehicles for an investigation involving child trafficking.

In a petition to the Inspector General of Police, Baba Usman, the activist alleged that Jimeta tried everything possible to frustrate investigations into the case, urging the IGP to caution the AIG “if he the IGP is not part of the deal as officers in the zone boast about”.