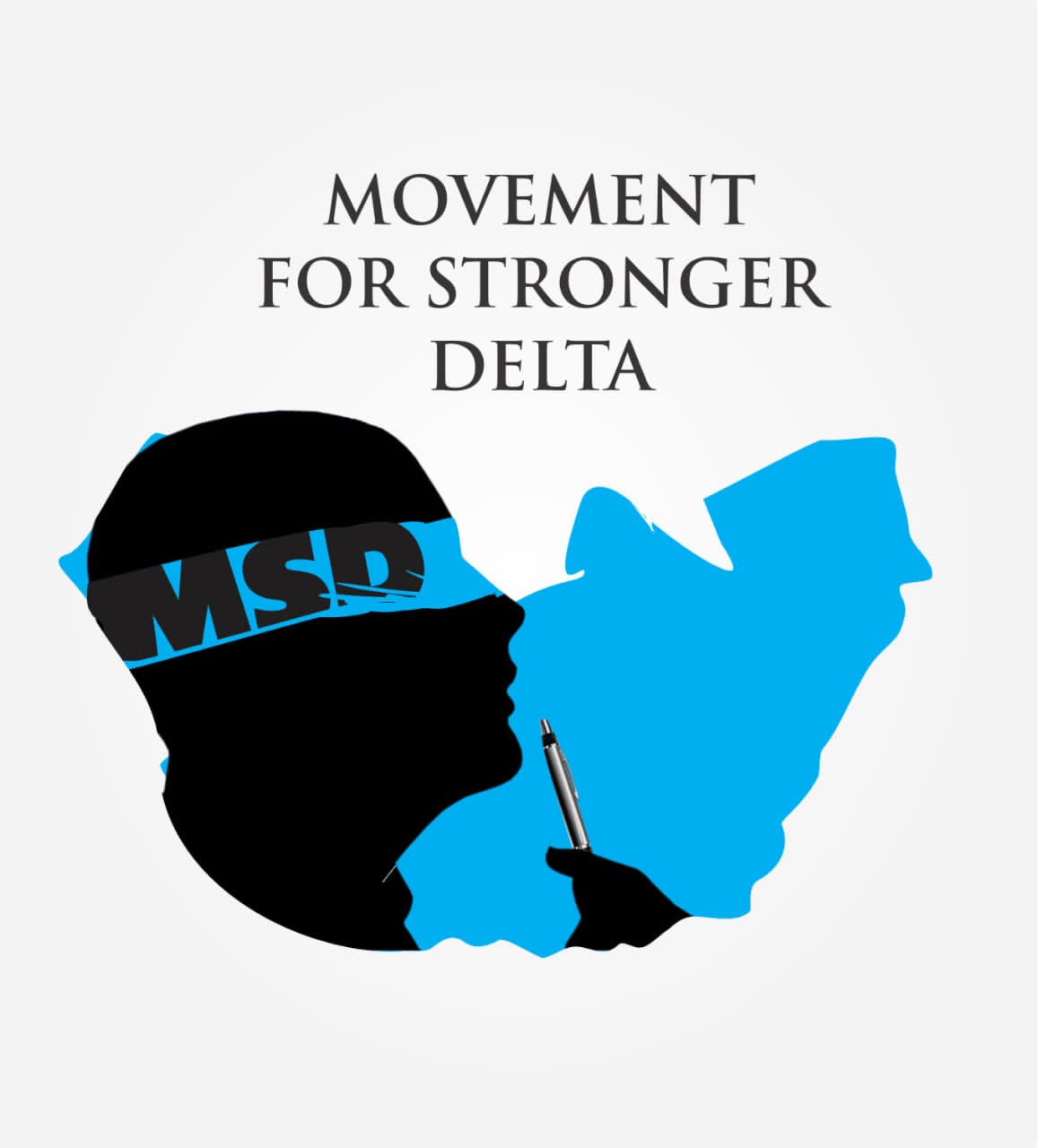 The Movement for Stronger Delta MSD, has read, watched, and followed with anger and trepidation, the frenetic, devious, diabolical desperation, which has consumed a particular clique of Delta State Peoples Democratic Party, PDP, from the moment the name of Rt. Hon. Sheriff Oborevwori was introduced into the gubernatorial race.

This particular clique, quite noticeably in a thinly veiled, undeniably unholy alliance with the main opposition party in the State, had actually commenced their opprobrious campaign with a dedicated manipulative salvo of Governor Okowa bashing, which was anchored on deliberately provocative misinformation tailored toward invoking ethnic political tensions and conflicts, over the destination of the next Governorship candidate of the PDP.

Fortunately, and as it always has been, with everything that Governor Ifeanyi Okowa has placed in the hands of God, the most popular and capable aspirant, Rt. Hon. Sheriff Oborevwori emerged as the PDP Guber Candidate, the destination was Delta Central as had been canvassed by many, who rightly advocated for equity in the conventional power rotation arrangement which existed in the PDP and the entire primaries to the glory of God, had ended in praise for the party and for the majority of Deltans.

But this particular clique in the PDP, which struts around in PDP ranks, with egocentric aloofness and a misplaced, delusional, and self-preserving entitlement mentality, will not rest on its dark, determined motivation of haranguing of Rt. Hon. Sheriff Oborevwori out of contention.

They actually started with the initial bogus efforts which, simply put, were hellish conjectures from the spiral imaginations of mischief-makers, who neither have the fear of God nor regard for a man of probity in their misguided foray for ephemeral political power, couched in a phony investigation of ‘two’ of the Delta PDP guber aspirants, which they claimed was sponsored by the Deputy Senate President and head of Delta political opposition, Ovie Omo-Agege.

Omo-Agege vehemently denied sponsoring such investigation, but the unhidden intention of the report, which discovered the now contentious ‘discrepancies’ in his documents, was to disqualify Rt. Hon. Sheriff Oborevwori either at the Screening Committee stage or by the Party’s Appeals panel and when all these failed, they resorted to wild and dangerous allegations that the Chairman of the Screening Committee, Governor Douye Diri of Bayelsa State had been bribed.

The Primary was subsequently conducted in a free, fair, transparent, level playing process and Sheriff Oborevwori coasted home to a landslide victory. The jubilations across the State that greeted his triumph were ample testimony of his popularity with Deltans.

Yet, this clique, in their puerile endeavour and unscrupulous irresponsibility, both to the PDP and to Deltans, proceeded to the Federal High Court, where they bombarded the Court with an avalanche of about eleven cases, all against Sheriff and having lost almost all of them on the grounds of lack of locus, they finally got some hope on Thursday, July 7, 2022, when Justice Taiwo Taiwo of the Federal High Court, upheld their case and disqualified Rt. Hon. Sheriff Oborevwori, as the PDP Guber Candidate, going into the 2023 elections.

The grounds for the disqualification were cited as discrepancies in the documents he submitted to the PDP in 2014 and 2022, when he contested the Delta State House of Assembly and the Governorship elections respectively.

However, this legal achievement by the garrulous clique, now seems like a pyrrhic victory, as the Court reportedly declined to name anyone, including David Edevbie, as a replacement for Oborevwori on the grounds that INEC has not published any name yet, as the Governorship Candidate of Delta PDP. The Court also refused to call for a fresh Guber Primary.

As to be expected, Rt. Hon. Sheriff Oborevwori, as a true leader, has urged his loyalists to remain calm and peaceful even as he has appealed the Federal High Court ruling, on nine grounds, through his legal team, led by Joe Agi, SAN and that, Ladies and Gentlemen, is where we are as at this moment.

The movement for Stronger Delta MSD, feels strongly that it is quite germane at this point, to state a number of irrefutable observations for the purposes of putting this matter in its proper perspective.

1. Olorogun David Edebvie, has said his decision to seek legal redress was to prevent the opposition from capitalising on a “blindingly obvious situation” to win the 2023 Delta governorship election. He further claimed that most Deltans were bewildered by the outcome of the PDP governorship shadow polls, describing the polls as “wanton disregard of the interests of our party and mood of our nation”.

2. In his words: “Undeniably, most Deltans received the outcome of the PDP Gubernatorial Primary with bewilderment and exasperation. To many, it appeared to be a wanton disregard of the interests of our Party and the mood of our nation.

“Propelled by the inevitable pall of gloom that hung over Delta State and faced with the real possibility that opposition parties would capitalise on the blindingly obvious situation, I was left with no alternative but to challenge the outcome in the law courts, albeit reluctantly.” He praised the judiciary for the courage to overturn the “travesty” in favour of the will of the majority of the people”.

3. It is obvious from Edevbie’s statement above, that the major reason adduced for challenging the Delta PDP Guber Primary, is completely different from the rambling gobbledegook sophistry, he has presented in the public space. First of all, Edevbie did not challenge the process of the Primary, which has been adjudged to be free, fair, and transparent. Rather, he challenged the so-called ‘discrepancies’, in the documents, presented to PDP, by Rt. Hon. Sheriff Oborevwori, which has absolutely nothing to do with the conduct of this particular Primary.

4. Secondly, his claim that: “Undeniably, most Deltans received the outcome of the PDP Gubernatorial Primary with bewilderment and exasperation”, is completely imaginary, hallucinatory, and could only have manifested in his own delusional camp, which was quite contrary to the widespread jubilation and celebration that broke out across the State, when Sheriff Oborevwori was declared the winner of the PDP Primary.

5. Thirdly, his heroic, ego-massaging homily, that: “Propelled by the inevitable pall of gloom that hung over Delta State and faced with the real possibility that opposition parties would capitalise on the blindingly obvious situation, I was left with no alternative but to challenge the outcome in the law courts, albeit reluctantly,” is another woeful and deceitfully arrogant and self-serving claim, for the simple reason that there was no reluctance in his decision, since his agenda against Sheriff had been pursued with frenzied zeal, from the onset and indeed the allegorical pall and gloom had only hovered with menacing propensity like a dark, poisonous cloud over his own brood in their sulking corner of Delta State, after the Primary.

6. Fourth, his assertion that he was “faced with the real possibility that opposition parties would capitalise on the blindingly obvious situation”, is actually an unequivocal admission of his covert agenda of working hand in gloves with the opposition against the PDP, with the singular, selfish and myopic mindset to throw away the baby with the bathwater, if he doesn’t win the primaries or if he doesn’t become Governor of Delta State by hook or by crook.

7. Indeed, if David Edevbie is half as smart and clever as his image laundering publicists want us to believe, then he would have known, before going to Court, that his entire case is predicated on Section 29 (5&6) of the amended Electoral Law, 2022, which deals with “Submission of list of candidates and their affidavits by political parties.”

8. To make the matter clearer, Section 29(5) states: “Any aspirant who participated in the primaries of his political party who has reasonable grounds to believe that any information given by his political party’s candidate in the affidavit or any document submitted by that candidate in relation to his constitutional requirements to contest the election is false, may file a suit at the Federal High Court against that candidate seeking a declaration that the information contained in the affidavit is false.

9. Section 29(6) states: “Where the Court determines that any of the information contained in the affidavit is false only as it relates to constitutional requirements of eligibility, the Court shall issue an order disqualifying the candidate and the
sponsoring political party and then declare the candidate with the second-highest number of valid votes and who satisfies the constitutional requirement as the winner of the election.

10. In order words, the import of Section 29(6) suggests that it can only be invoked for the substantive election and not the primaries. Therefore, if the PDP wins the Delta 2023 Governorship election and David Edevbie, who took part in the Delta PDP Guber Primaries (as stipulated by the Electoral Act) proceeds to challenge in court, the eligibility of the party’s candidate to contest and win, then not only will the candidate be disqualified but the Court shall issue an order also disqualifying the sponsoring political party and then declare the candidate with the second-highest number of valid votes and who satisfies the constitutional requirement as the winner of the election, which in that case, will be the opposition.

11. Of course Section 29(8) provides the icing when it further states that: “A political party which presents to the Commission the name of a
candidate who does not meet the qualification stipulated in this section, commits an offence and is liable on conviction to a fine of =N=10,000,000/= (Ten Million naira only). This is double jeopardy.

12. So, the question now is, why will David Edevbie, knowing the huge implications of this section of the Electoral Act to the PDP, still proceed with his action to go to court. Or did he read the Electoral Act upside down? Otherwise, is his legal action, knowing what the Electoral Act says, not tantamount to seeking to disqualify his own political party from the election, thus paving the way for the opposition to claim an undeserved and unmerited victory at the polls? Is his action not a deliberate anti-PDP strategy, especially against the backdrop that the PDP is also joined as a defendant in the case and the party will be the greatest loser if this plot succeeds?

13. Sadly, overtaken by their hate-filled agenda as characteristically resonant with unrepentant crusaders, they threw caution to the wind, and went berserk in their fervent hysterical efforts to disparage Sheriff Oborevwori, without studying the full import of what their ill-conceived plot would unleash, if allowed to run its course. Or perhaps is their action even a subtle, covert, well-scripted, and orchestrated subterfuge, designed to destabilize PDP in Delta State ahead of the 2023 general elections?

The Movement for Stronger Delta, MSD is however, quite confident in our unshakable faith in the judiciary and unwavering in our conviction, that in the end, justice will be done both in the spirit and the letter of the law, as we approach July 17, which is the present deadline for all political parties to submit the names of their Governorship Candidates to INEC.

That as we have always maintained, is the SIMPLE Agenda.