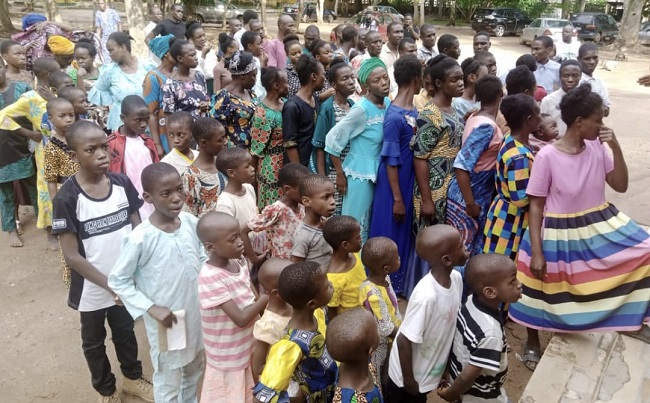 There was a mild drama at the Ondo State Police Command on Monday, as some of the victims of the Whole Bible Believer Church, alleged to have been hypnotised refused to leave the police custody after they have been released by the police, saying they must be raptured with their Pastor.

It was gathered that they vowed to remain in police custody until their pastor and his assistant, David Anifowose and Peter Josiah respectively are released.

This is just as some parents besieged the Police headquarters from various parts of the country after they found out that their wards who have been missing for some months had been living inside the church but got to know about it through the television on Saturday.

One of the parents who came from Ilorin, Oluwole Omoseebi, said his son, a 400-level student at Federal University of Technology, Akure, Ayobami, has been missing since 2020 during the COVID-19 period.

He said “I have a brother here in Akure who my son is living with, he is a pastor too but he told me my son has been coming home on weekends and suspected his movement.

“I had to come down to Akure to find out what is happening and I was told he was in a church in Ondo town where I met the pastor and explained that I have been looking for my son but he was violent that day and had to drive me away from the church with one of his sons.

“The boy returned to Ilorin thereafter and I warned him against returning to the church but he went back to the church after the school resumed and we never set our eyes on him.

“I called him in April when one of his sisters was getting married but he told me he will rather obey his spiritual father than obey his biological father and he did not show up for the wedding because he doesn’t have anything to do with us again, saying we are idol worshippers as Deeper Life Bible Church member,”

Another parent, Mr Michael Olorunyomi, whose daughter was released to him last Saturday disclosed that “my daughter did not eat or drink anything since Saturday night.

“She said the pastor has instructed them not to eat or drink from their biological parents at home. She has been behaving irrational and I think and believe that what is happening to these people is beyond my comprehension.”

A mother to one of the allegedly hypnotised victims, Mrs Adebunmi, who begged her daughter to leave for home with a pledge to take care of the girl, received the slap of her life, while the girl insisted she does not know her, saying the pastor and members of the church are her family members.

While narrating her experience, Mrs Jessica Akintemi, said her two daughters released to her on Saturday have been behaving strangely, saying one of them just woke up in the middle of the night, hallucinated and they refused to eat.

A 35-year-old man, who identified himself as Adefemi, said he has been begging his 44-year-old brother to leave the police custody after being released but said his brother vowed not to leave the police headquarters without the pastors
Adefemi said, in tears, “I can’t explain what is going on with my brother. This is black magic because my brother seems to have lost his senses. He said he must be with his pastors as the rapture is within the corner.”

Briefing newsmen on the latest development at Command headquarters in Akure, the Police Public Relations Officer (PPRO), Funmilayo Odunlami, said despite different appeals, the victims vowed to remain in police custody until their pastor and his assistant are released.

“Despite all our efforts, some of these victims refused to go home, saying they are ready to remain in police custody until their pastor and his assistant are released.

“We are trying to work out modalities on what to do to them to get them rehabilitated. We have over 20 people who have refused to go home,” the PPRO added.

She, however, said that the pastor, Anifowose David and his 45-year-old assistant, Josiah Peter will be charged to court upon completion of the investigation.

Meanwhile, the government is working out modalities to rehabilitate the hypnotised victims of the Ondo church while considering legal steps to take custody of some of the children.

Commissioner for Women Affairs and Social Development in the state, Mrs Adebunmi Osadaun, who disclosed this said: “We just interviewed some of the children who are between aged 11 to 17 years old. The way they spoke seemed they have been hypnotised.

“They speak with so much confidence that God will soon come (rapture) and they are on a seven-day camp. They have not eaten for seven days and they still want to go on fasting.

“What baffles me as a mother is that these children are already hardened from the interview we conducted with them. They are indoctrinated.

“Some of the parents of the children even told us that they left the church when they started seeing some strange things. We also want to know if the pastor partially believes there should be no education, then were his own children not educated? But we were made to know that he has two children who are educated and graduated and now equally members of the church.”

“We also want to have a database of the children through family tracing from the ministry so that we can get how these children were hypnotised and indoctrinated. And if they need rehabilitation, then we would have to go legally by taking custody of the children.

“The way some of the children are talking, so of them should even be taken to the rehabilitation homes. They are living in a different world entirely. They look so wired,” the commissioner added.

It will be recalled that about 77 people compromising 54 adults and 23 children were allegedly hypnotised, abducted and kept in the underground cell of the church by the pastor of the Church, Mr Anifowose David and his 45-year-old Assistant, Mr Josiah Peter.

It was gathered that the assistant pastor claimed rapture was going to take place by September, hence he encouraged the church members to stay within the church.

Why Okowa, ‘A Grassroot And Astute Politician’ Is The Best Choice For Atiku – Delta Poly Rector