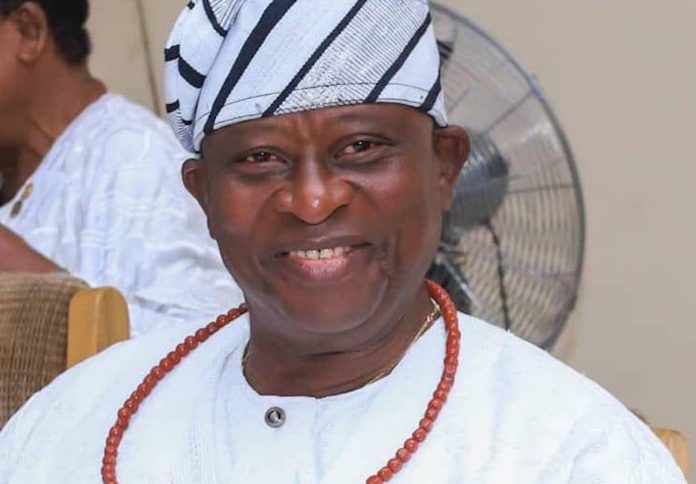 BIGPENNGR.COM gathers that Gbagi withdrawal was hinged on alleged hijack of the process by Governor Ifeanyi Okowa whom he allegedly accused of threatening his life, bribing delegates and having a predetermined outcome for the primaries.

Gbagi, in a worded petition titled: ‘ Threat to Life Anti-democratic Conduct by His Excellency Ifeanyi Okowa Governor Delta at Government House Asaba’ addressed to the PDP national chairman, state chairman and copied all critical stakeholders, said he was pulling out because the governor had a pre-determined the primary election contrary to all his promises and pledges that there will be a free, fair and level playing ground for all aspirants.

Giving a graphic details, Gbagi said: “On arriving at the Government House, Asaba the venue of the meeting I was surprised to be accosted by the Chief of Staff to the Governor, Hon. Ovie Agas who pleaded with me that contrary to the message sent out inviting all ad hoc delegates that he was requested by His Excellency to ensure that I and several other persons were not allowed into the venue.

“I insisted that as a former Minister of the Federal Republic of Nigeria and as an ad hoc delegate I was entitled to be told the reason why I was persona non grata in a PDP event that some persons who are not quite two years old in the party are entitled to attend.

“When pleas by the Chief of Staff to the Governor of Delta State did not move me out of the premises of Government House, I was accosted by a gun totting ADC to the Governor Mr. Frank Omokhoje Longe who told me he had orders to shoot me and nothing would happen if I did not immediately vacate the premises of Government House, Asaba. That I had been told that the Governor does not want me in PDP or any PDP meetings henceforth and I was still insisting on attending the meeting.

“Whilst the altercations were going on the Chairman of my local government council identified me on the list of delegates as an ad hoc delegate and pointed out that my name was on the list. But all pleas fell on deaf ears.

“It transpired that the reason Senator Dr. Okowa called the meeting was because all available information was that both within the party and in the larger Delta State people were making it clear that his preferred CANDIDATE in the forth coming primary gubernatorial primary election, Rt Hon. Sheriff Oborevwori was unacceptable.

“The Governor called the meeting to intimidate and witch hunt ad hoc delegates using the pomp and circumstances of his office and tax payers’ money to overawe the delegates. The governor issued threats against any person who he said would engage in anti-party activities by voting against his preferred candidate in the forthcoming primary elections of PDP.

“He also openly offered inducement in the real of between N1 Million Naira and above if the delegates would vote for Hon. Sherrif Oborevwori. He said there would be more, if they toed his line. On the spot, each ad hoc delegate who was allowed into the venue was given N100,000 (One Hundred Thousand Naira) with N1 million promised at the venue.

“Senator Dr. Okowa is bent on sinking the fortunes of PDP in Delta State with an unmarketable candidate for reasons best known to him, but using threats to the life of members of PDP crosses the line. I could have been killed by a person whose salary is paid by the people of Delta State simply because I wanted to participate in the political life of my party; if I were a nobody the story might have been different.

“I was a founding member of PDP 1998 and I have been a member of PDP since then till date. I served as Honorable Minister for Education and it is still on record that in 9 months we founded 13 universities all over the federation.

“I will not continue to pretend that the party which we founded 23 years ago and brought to Delta State and by the grace of God has won every Governorship election since 1999 has not changed beyond all recognition by the above acts.

“It is therefore my humble view that as a Foundation member of the Party from 1998 to date, a former Minister for Education, having validly obtained my expression of interest and nomination form, screened by the screening panel and issued a certificate to contest the Governorship election, my refusal today as a ad hoc delegate is a clear act of hostility, desperation and threat to life.

“I hereby withdraw my participation in the primaries since Governor Arthur Ifeanyi Okowa, contrary to all his promises and pledges that there will be a free, fair and level playing ground is untrue since he has pre-determined the primary election”. 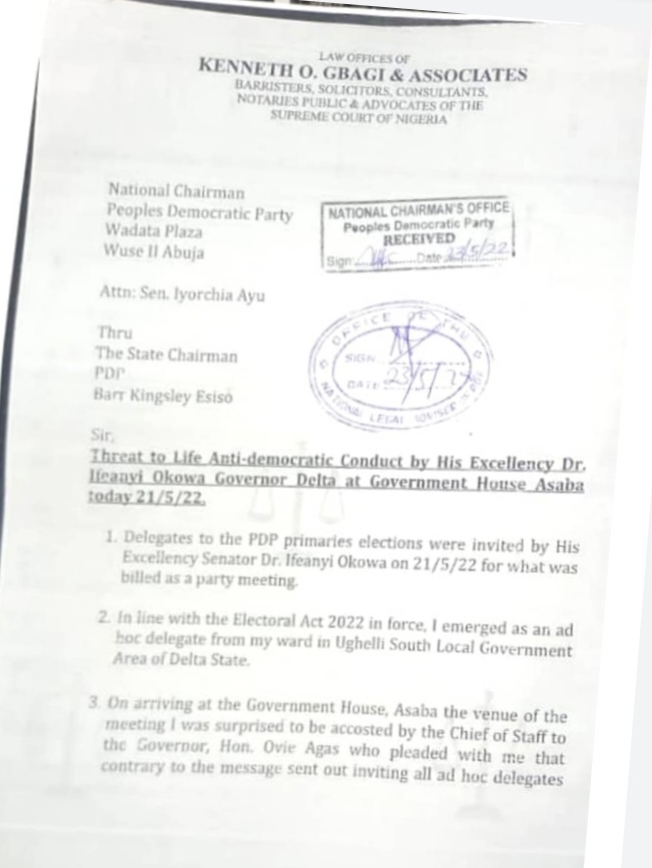 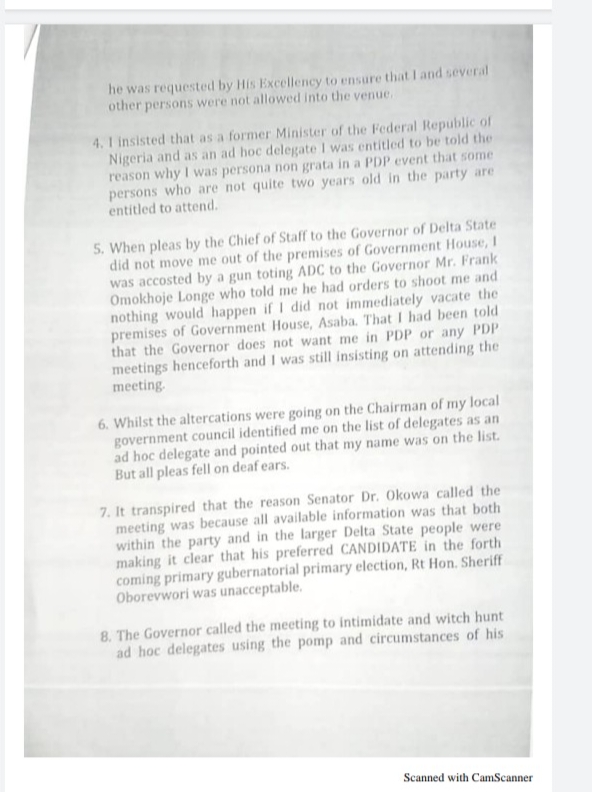 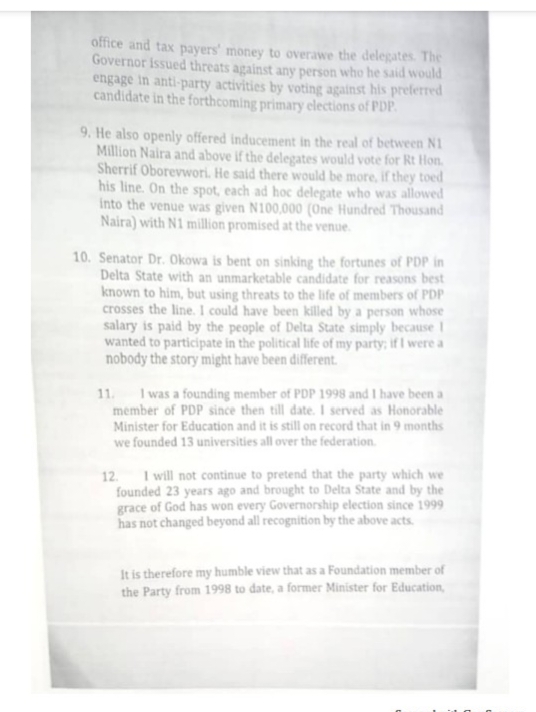 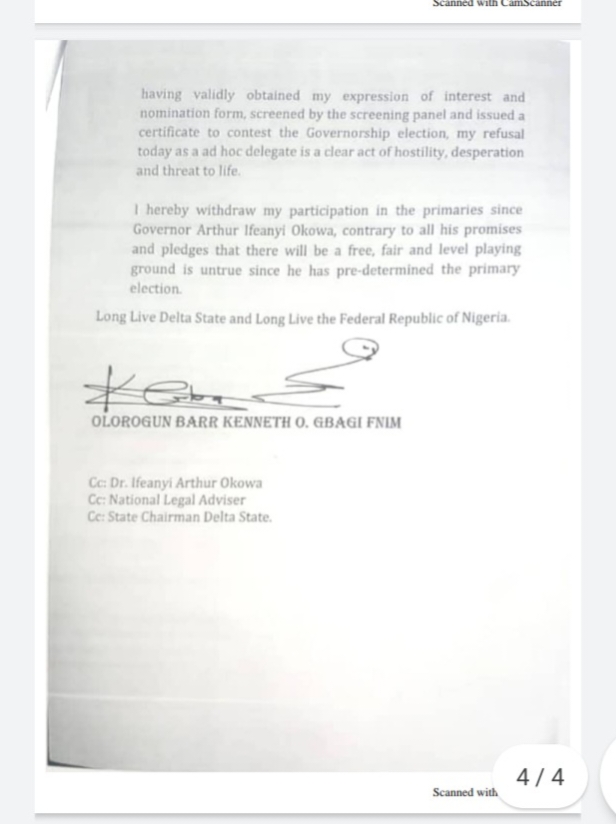