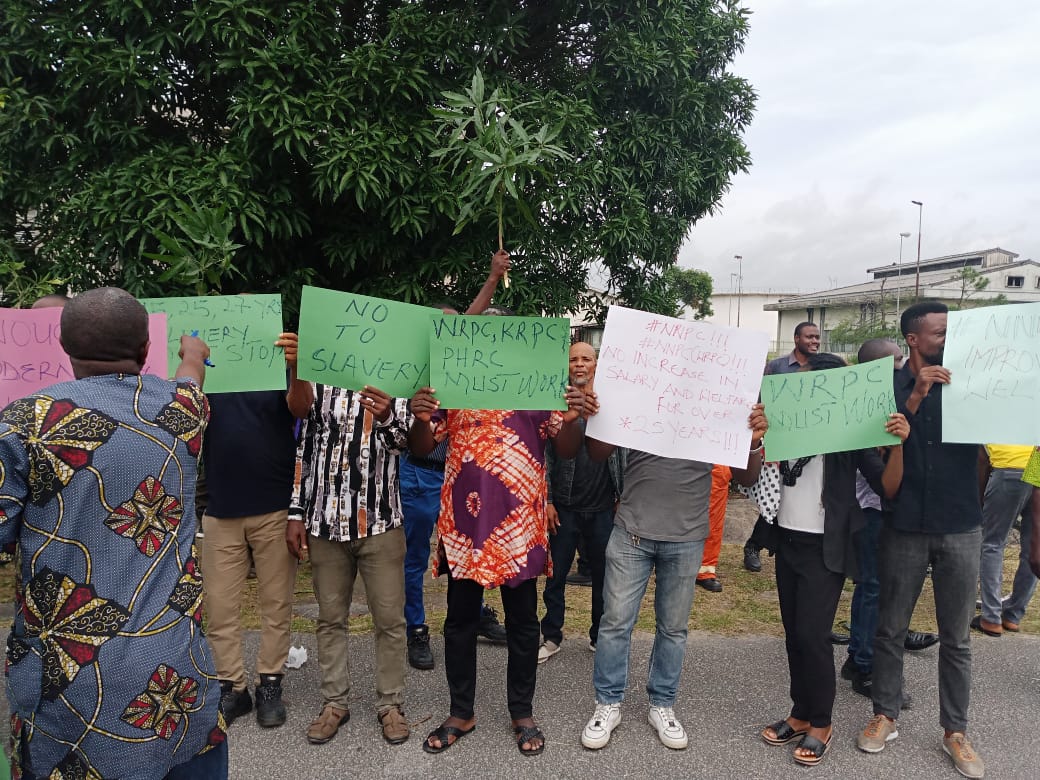 Hundreds of workers of the Warri Refining and Petrochemical Company (WRPC), in Warri, Delta state, on Thursday staged a peaceful protest against the management of the Nigerian National Petroleum Company Limited (NNPC) over  continuous consualization of staff.

The workers bemoaned NNPC’s failure to regularise their employment over the years.
Calling on the Group Managing Director of the NNPC, Mele Kyari, to urgently address the vexed issues, the protesters who resume work early in the morning convened inside the premises of the WRPC around 9am, from where they took the protest off to other part of the company.
The protesters are demanding their “conversion from casual to permanent staff, increase in salary, payment of all outstanding allowances, better working conditions and welfare”.
Some of the placards bore by the protester with various inscriptions reads; “No conversion, no quick fix,” “15, 25, 27 years of slavery must stop,” “NNPC stop technical lies,” “WRPC, KRPC, PRPC must work,” “Increase our salary,” among others.
Condemning the insensitivity of NNPC to their plight, the protesters chanted solidarity songs at draw management attention to their plight, lamenting that some of them had worked for 28 years as casual staff.
Numbering 336, some of the protesters who say they have put in 28 years, are  requesting payoffs, since the NNPC management has “refused” to yield to their demand for regularization over the years.
Accusing the NNPC management of consistently lying and failing to honour promises made over the issue that has lingered for many years, they warned that there will be no resumption of work until their demands are met.
According to one of the protesting staff (name withheld), “the workers want to leave the job and they want the management to pay them off since the management don’t need their services.
“On the ground that the management still wants their services and wants to keep them, the workers are demanding for their conversion from casual staff to permanent staff of the organization”.
Recall that a similar protest which took place in 2019 and 2021 were resolved by WRPC host communities’ leaders who are said to be currently displeased with the disposition of the NNPC management on the matter.
22
SHARES
240
VIEWS
WhatsappShareTweetLinkedinTelegramSubscribe
Related Topics:
Up Next

Minister Announces May 2, 3 As Public Holidays