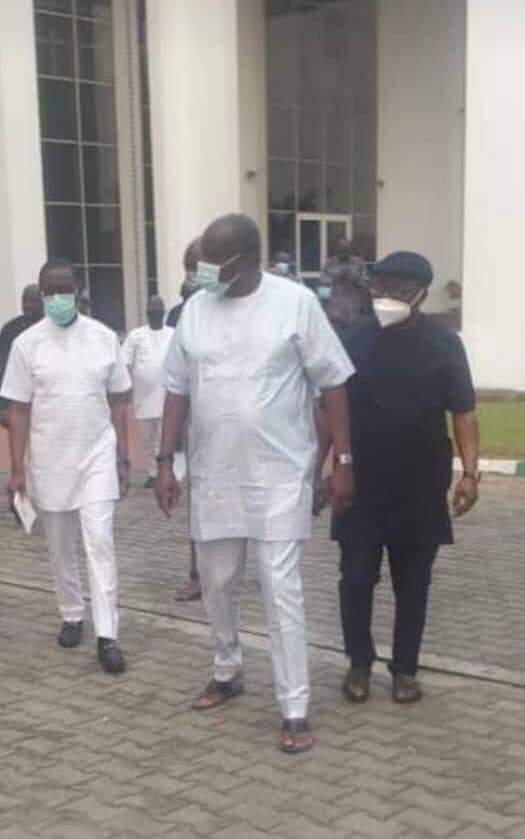 Governor Ifeanyi Okowa last night met with two of his predecessors, Chief James Ibori and Dr Emmanuel Uduaghan alongside other caucus members of the Peoples Democratic Party (PDP) in Delta State, signalling the beginning of horse-trading, intrigues, alignment, realignment, and political scheming that would characterise the next year general election.

The meeting, being the first publicly since politicking ahead 2023 started gathering steam was held at Government House Asaba and would herald the much publicised mega rally of the PDP in the State capital.

The late night meeting was the centerpiece of a marathon day for the three leaders who will feature in the rally which would open the floodgates for other political gathering in the days to come.

It was gathered that the caucus meeting was mainly on how the PDP would institutionalise zoning of the Governorship against insinuation that both Ibori and Okowa would x-ray their various interest and seal deal on the next governor of the state.

Pundits believe that once Ibori and Okowa including the party caucus have been able to agree on which senatorial District should produce the next governor, the issue of a successor would be a work over.

Political watcher told the BIGPENNGR that the only issue discussed and would be discuss in subsequent caucus meeting, is the issue of zoning, because according to the source the governor has agreed to institutionalisation of the PDP zoning of the Governorship.

A photo which suffaced online late Friday evening, showed Ibori walked his way to the Government House, following him, was his cousin and former governor, Dr Emmanuel Uduaghan and flanked by the incumbent governor, Senator, Dr Ifeanyi Okowa.

Although details of the
meetings were yet to unfold as of time of filling this report, the meeting is likely going to rest speculations making the round that Ibori and Okowa are at loggerheads with each other over the latter successor.

However, the enlarge caucus meeting was deadlocked as the only issue that was deliberated upon which borders on the zoning of the governorship to Delta Central Senatorial District almost tore the meeting apart.

The caucus meeting was adjourned and no decision was reached until the next caucus, an observer disclosed.

Dependable sources in the State told The BIGPENNGR that the last night meeting was not between Ibori and Okowa, maintaining that there was no closed door meeting at all.

According to the source, many things flying on social media about the meeting were all lies, saying that the meeting was more center on pacifying the people from Delta South to allow Delta Central Senatorial District have the governorship this time round as being canvassed in many quarter.

“It was a normal caucus meeting and a very enlarged caucus for that matter. So it was not like a meeting between four or five of them to agree on the governorship. In short the issue of successor is not being discussed anywhere for now.

“There was no closed door at all. It was an enlarged caucus where they discussed the way forward for the party.

But it was more center on trying to appease our brothers from the South to allow our brothers in Central to be the ones to run for the position of governorship.

The meeting was also to pacify the South to down their tools and allow the people from Central to have it and after central, South can now go.

“They were just trying to find a way to institutionalised Zoning in PDP but you know it is a PDP thing because you know the opposition people will always want to run every four year so it doesn’t concern them.

“So whether it is Delta South or Central or North the opposition people must still run but PDP is now trying to see if they can institutionalise Zoning this time round.

“Once our people from the South agree to the formula which I believe they will, at that point they can now have another meeting again. And in that meeting the Delta South will then brief on their position. So when it has been zeroed to Central we can then start talking about who is the anointed one in the Central and see how we can manage the number of aspirants in the Central for the consensus candidate.

“That is what’s happening in the State. Anything other than this is just speculative, disregard it”, our very often credible source said.

Corroborating this, an insider, Collins Uduaghan, who posted materials about the meeting on social media, said the party Chairman Kingsley Esiso had moved a motion for the zoning of the Governorship to Delta Central and he was supported by Sen. Stella Omu, a former chief whip and House of Representatives, PDP Minority caucus leader, Hon. Ndudi Elumelu but was opposed by Sen. James Manager, a Governorship hopeful and Chief Edwin Uzor, a Special Adviser to governor Okowa on conflict resolution.

Against fresh speculations making the round that Okowa allegedly confronted Ibori for blocking him to produce his successor, the political pundit said; “The issue of who will succeed Okowa come 2023 never came up and was never in the agenda of the meeting.

“So please disregard any news, rumour and propaganda going round that Governor Ifeanyi Okowa confronted our National Leader H.E Chief James Ibori saying “You picked your successor, allow me pick my own successor”.

Continuing, he said; “The Governor Okowa we know is very careful with his words and will never make such careless comments and he never made such comments.

“Those who are bent seeing that they destroy the aged long brotherly love between our National Leader Chief James Ibori and Governor Okowa are the ones spreading falsehood”, he said.