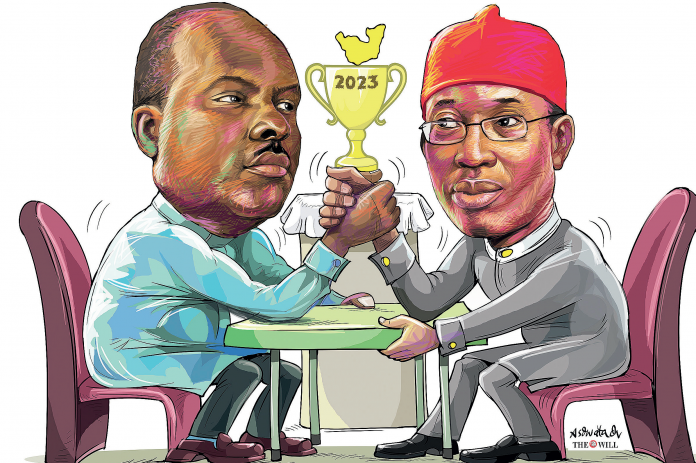 The group, Movement for Stronger Delta (MSD) has cautioned a self-styled ex-militant ‘warlord’, Eshanekpe Israel , a.k.a Akpodoro to desist from trying to bring Governor Ifeanyi Okowa on a collision course with his predecessor, former governor, Chief James Onanefe Ibori.

The group made the call following a recent publication in which the said Akpodoro tried to compare the administration of Okowa with that of Ibori on equitable development of the state.
Akpodoro had tackled Okowa over alleged failure to spread development equitably to all parts of the state.
But MSD, in a statement by its national coordinator, Dr Festus Bono Patani, yesterday, said that the said Akpodoro was just an “attention seeker” who is out to tarnish the good name of Governor Okowa and pitched him against his predecessors.
“It is not difficult for us at MSD and indeed all other right-thinking observers, to see through the dishonesty in the intentions and motives of this attention seeker, which he vividly encapsulated in his sneaky statement to spite the person of Governor Okowa and bring him on a collision course with the amiable and respected former Governor and foremost PDP leader, Chief James Onanefe Ibori”.
The group said that the ex-militant leader failed to realise that the administrations of Okowa and that of Ibori have different challenges peculiar to each and both leaders have their different management styles.
The group noted that Deltans are well aware of the uncommon commitment of their Governor towards the even spread of development projects across the 25 local governments of the state and each of the three senatorial districts.
While saying that the said Akpodoro was out “to please his paymasters”, the group said that evidences are abound of Governor Okowa’s developmental strides in the state and are verifiable by persons with unadulterated motives.
“Akpodoro’s so-called press release is an erroneous appearance based on deception to create a false impression of animosity between Chief Ibori and Governor Okowa.
“Unfortunately for him, he does not know, or perhaps he was too young to know that Ibori and Okowa have come a long way in politics; a relationship that culminated in Chief Ibori becoming governor and Okowa serving in many portfolios as commissioner at different times in that administration.
“Ibori and Okowa have consistently and committedly worked together to achieve the current brand that PDP enjoys in Delta State”, MSD said.
“Who will tell him that it is this spirit of love and commitment to the PDP that did not make PDP an orphan in the days that Chief Ibori was in-situ, because of the capable lieutenants like Senator Okowa, among numerous others, that kept the Delta PDP family intact and formidable enough to fence off all oppositions.
Furthermore, the group said that It is an open secret that Governor Okowa has operated based on the provisions of the Constitution of the Federal Republic Of Nigeria (as amended), and has committedly followed the statutes of the PDP, as well as fulfilling the Beijing affirmative action for women in appointments.
“There’s no government anywhere in Nigeria today, that has recognized women and honoured them with appointments the way Governor Okowa has done.  Check out the local governments, it’s only in Delta PDP and most admirably in the administration of Governor Okowa, that women have emerged in a large number as Vice Chairmen in the local Councils, with at least no fewer than three women as councilors in several LGAs.
“Let’s admonish Akpodoro and his ilk that PDP in Delta State will, in the fullness of time, resolve issues through its well-structured political resolution system that has kept the party in the state united, strong and all conquering.
“We also urge Akpodoro to leave our good-natured leader, Chief James Onanefe Ibori, out of his frustrations BECAUSE Delta State is in safe hands and the Okowa administration is building  solidly on the Ibori legacies to achieve and deliver a stronger Delta for all Deltans going forward”, the statement added.
24
SHARES
456
VIEWS
WhatsappShareTweetLinkedinTelegramSubscribe
Related Topics:
Up Next