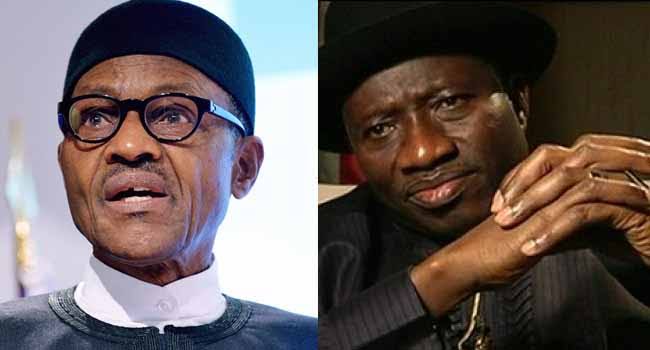 The poster is facilitated by a group known as the National Agenda For Goodluck Ebele Jonathan.

While not much is known about the group, the poster surfaced amid growing anxiety in the ruling All Progressives Congress (APC) as Jonathan Thursday visited President Muhammadu Buhari for the second time in a week.

The frequency of the former president’s visits to the Presidential Villa, Abuja, comes amidst reports that he is being considered by a section of the presidency and some governors of the APC for the presidential ticket of the party come 2023.

Since Jonathan’s visit on Thursday, December 30, 2021 to Aso Rock, there has been anxiety in the ruling party especially among those who are eyeing the presidency.

During his last visit, no statement was issued on the agenda of the meeting between the incumbent president and his predecessor.

But after Thursday’s meeting, a presidential spokesman, Femi Adesina, in a statement said Buhari received briefing from former Jonathan on the political developments in the Republic of Mali.

He said a special meeting of the ECOWAS which holds in Ghana, on Sunday, to deliberate on the political situation in Mali was the subject of the parley between the Head of the ECOWAS Mediation Team, former President Jonathan and President Buhari.

But a chieftain of the party and the National Coordinator of the Tinubu 2023 Non-Negotiable (TNN), Kunle Okunola, said he was not convinced that Jonathan visited the villa because of Mali issue, adding that it is part of the conspiracy to make Jonathan the consensus candidate of the APC.

According to him, that explained why Buhari insisted on including consensus in the Electoral Amendment Bill.

He said Jonathan found it most convenient to visit the villa anytime, saying the president is doing the bidding of the “colonial masters.”

“Jonathan is the colonial masters’ candidate and Buhari cannot say no and that is why he was insisting on consensus because Jonathan cannot ridicule himself by going into primary with Tinubu or any other candidate. So APC is bringing Jonathan, no doubt about it,” he said.

Okunola said the delay to conduct the national convention was part of the script being played to make Jonathan the consensus party’s flag bearer.

He said it was unfortunate the APC National Leader Tinubu “had been caught in this situation for long.”

According to him, it is high time Tinubu began to “look inward and having a handshake across Nigeria if he is indeed ready to lead the country and look beyond APC.”