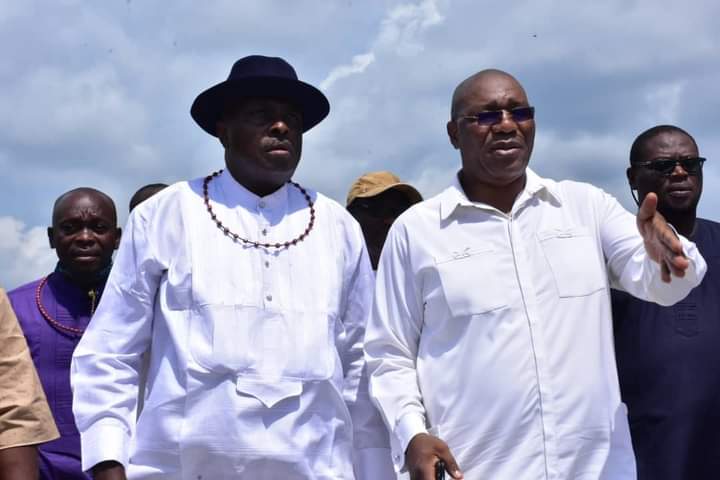 The group, Delta Ijaws G-5 Movement, on Saturday, said that the ‘historic visit’ to the Gbaramatu Kingdom by the former Governor of Delta State, Chief James Onanefe Ibori, has heralded yet another milestone in the achievements of ethnic cohesion among the various ethnic groups in Delta State, especially the Ijaw and Itsekiri ethnic groups.

The group, in a statement signed by its Director General, Comrade Clement E. Ekpas, sad “Chief Ibori who remains the symbol of peace and unity in the State has demonstrated through his visit to the Kingdom that the cord that binds us together as a family living in peace and harmony is more than the little dividing asunder.

“Not only did the man, who is proudly called the father of Delta politics visited the ancient Gbaramatu Kingdom to further cement the bond of unity among the ethnic groups in the State, he has also visited one of his numerous political sons, His Excellency, Deacon Kingsley Burutu Otuaro, the Deputy Governor of Delta State. No doubt that Deacon Otuaro is a proud son of Ibori’s Political Dynasty whom the former Governor has tutored to take up leadership positions in the State.

“For the father of Delta politics to visit his son at his country home at Okerenkoko in Warri South West LGA whom the Odidigborigbo has prepared long a go to take up mantle of leadership in his future endeavors shows that Chief Ibori still remains the Governor-General of Delta State whose democratic credentials will continue to birth a united political family in the State.

“Now that the father of Delta politics is again, holding forth on the 2023 conundrum, it is evident that the State’s political future is bright, especially within the ruling PDP. We have no doubt that Chief Ibori in his usual political sagacity will present to Deltans from the ruling PDP in 2023 another symbol of unity like himself and his predecessors in order to continue his befitting legacies.

‘On behalf of the Delta Ijaws G-5 Movement, we commend and appreciate the Odidigborigbo of Africa for continuously building bridges of peace and harmony in the State and also engendering a secured and virile political future for the PDP, especially as it concerns the 2023 transitional project. May the Almighty God continue to grant you good health and long life to continue to coach your political family in the State”, the statement concluded.