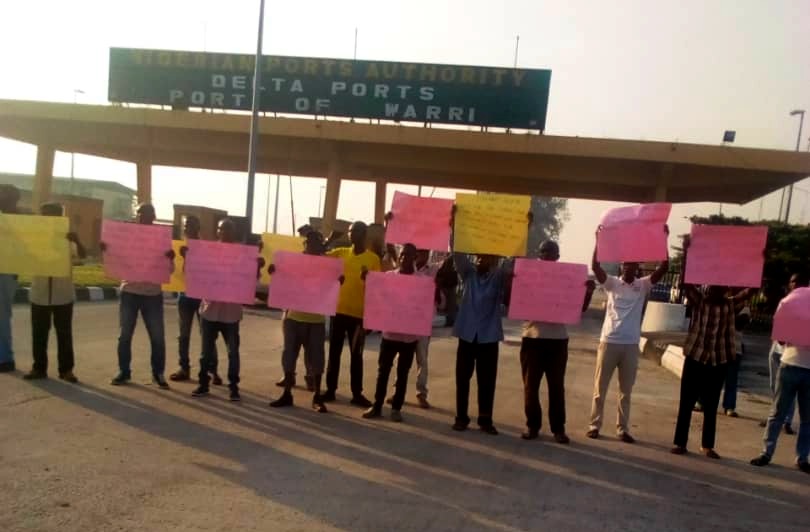 Five years after they were disengaged, maritime workers in Warri, Delta State, on Monday, staged a peaceful protest at Nigeria Ports Authority over nonpayment of their severance allowances.

BIGPENNGR.COM reports the ex-workers besieged the facility around 7:30am, threatening to remain there until their demands are met.

The protesters are mainly tally clerks and onboard security operatives, who were laid-off five years ago without payment of their severance allowances.

Singing solidarity songs, the protesters who bore various placards with inscriptions had converged on the main entrance to the Warri Port under the auspices of the Maritime Workers Union of Nigeria.

Some of the placards bore by the protesters read: “NPA tally clerks and onboard security guards are tired of this oppression”; “We are tired of dying and losing our members to diseases, please save us”; “NPA, why have you refused to pay our severance packages, five years after?”; “NPA, we will not leave here until we receive our entitlements”.

Addressing newsmen, Mr. Francis Agbudumhe and Mr. Nathaniel Chukwu who spoke on behalf of others said that they had been subjected to series of verifications by the NPA management with a view to effecting remittances but lamented that the promises for payment had not been fulfilled till date.

The protesters numbering over one hundred, claimed that some of their members had died in waiting, and called for an urgent intervention of the Minister in charge as well as the Executive Chairman of NPA.

They noted that their counterparts who were similarly affected in other Ports across the country had long ago collected their respective entitlements from the Authority.

Related Topics:Maritime Workers Union of NigeriaNigeria Port Authority
Up Next