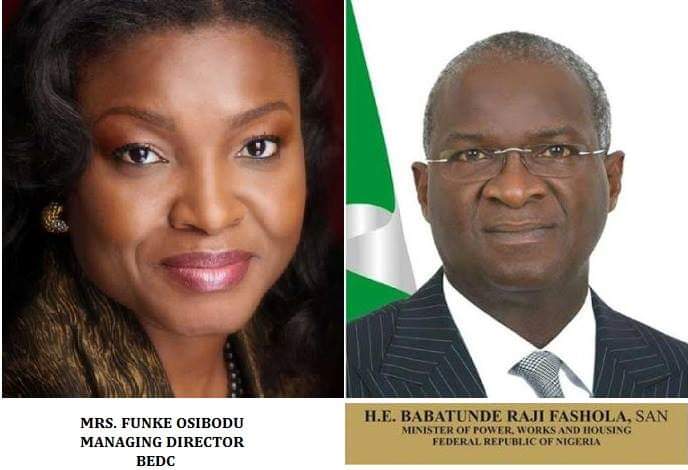 The Federal Government has been asked to revoke the operational licence of the Benin Electricity Distribution Company (BEDC) over gross incompetence and poor service-delivery in power distribution which has left Delta state in darkness.

National coordinator of the Niger Delta Peace Coalition, Mr. Zik Gbemre made the call in a petition to Minister of Work and Power, Babatunde Fashola, obtained by BigPen Online on Friday.

According to him, BEDC has demonstrated that it does not have the capacity, expertise, wherewithal and capability to distribute power supply to its consumers in the various States under them, especially in Warri and environs of Delta State.

Vigeo Power Limited is said to be the owner of BEDC, which has Mrs. Funke Osibodu, a former Managing Director of Union bank Plc, as the Chief Executive Officer/Managing Director.

BEDC, with an area of wide geographical spread, spanning four states – Edo, Delta, Ondo and Ekiti, has 16 business districts in all.

Gbemre said BEDC have failed woefully in its statutory obligation as a supposed power distribution company since they came on board.

He said many stakeholders and the Nigerian masses within the States covered by the BEDC, have been demanding that the Federal Government and relevant authorities in the Ministry of Power revoke operational license of BEDC.

Consequently, he lambasted the Delta state government for showing no “iota of concern to address the overwhelming public complaint about BEDC”, saying that despite countless complaints by different sections of the Nigerian public living and doing business in Delta State, especially in places within Warri and environs, “the Delta State Government has practically gone to sleep”.

The petition said, “whereas, other State Governments under BEDC, like Edo State, are doing what we expect the Delta State Government to do, by putting BEDC at its place – as an incompetent power distribution company that deserves noting but having its operating license revoked by the Federal Government.

The group said that the recent response by Edo State Governor, Mr. Godwin Obaseki, who had few days ago walked the CEO/MD of the Benin Electricity Distribution Company (BEDC), Mrs. Funke Osibodu, out of his office for failing to meet obligations to electricity consumers in Edo State and throwing the entire State into darkness for weeks is exactly the kind of response that is expected from a State Government who is very much aware of what is happening in its State and people, and is concerned about taking a position to address it.

“Even the National Assembly, like the Delta State Government, have been ‘Pretending’ And ‘Playing Ignorant’ about this power distribution problem and complaint with BEDC.

“Despite the overwhelming cries and complaints from the Nigerian public in Delta State, and other States, they have been playing deaf, indifferent and unconcerned about the poor power distribution situation with the BEDC.

“One begins to wonder if they have something with the BEDC Management that the Nigerian public is not aware of, which might have been responsible for them not coming out hard on the BEDC, especially to have their operating license revoked by the Federal Government.

“Whatever the case may be, it is very unpatriotic and unbecoming of any Government, to just sit down and fold its hands while its people are daily forced to live in darkness.

“How can any Government sit back and allow one power distribution company (BEDC) to hold the entire State to ransom with their gross incompetence and poor service delivery? It simply does not make sense. People are daily complaining about the BEDC and their poor service delivery in power supply, yet the State and Federal Government Authorities, including the Lawmakers, are practically doing nothing to address the situation.

“But how come Delta State is neglected by the BEDC in power distribution, especially Warri and environs, which have been left in darkness?

“Delta State cannot be producing the gas that is used in generating power supply for the country, and yet Deltans do not get the necessary power supply.

“The BEDC has proven beyond every reasonable doubt that they do not have the capacity and capability to distribute power to the States under them.

“As such, their operating license should be revoked by the Federal Government with immediate effect”.

EFCC Detectives Arrest Lebanese With Over $2m At Abuja Airport