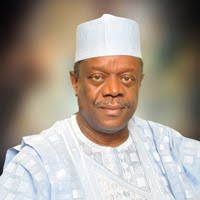 Contrary to claims by President Muhammadu Buhari that some Nigerian youths are lazy, former Military Administrator of Akwa Ibom State, Air Commodore Idongesit Nkanga (retd), has declared that youths of Niger Delta region are not lazy.

He spoke while addressing guest and dignitaries at the wedding reception of Barrister Gideon, son of Niger Delta rights activist, High Chief Godspower Gbenekama at KFT Place in Warri, Delta state over the weekend.

Nkanga, who is the National Chairman of Pan Niger Delta Forum, PANDEF, an umbrella body of the people of the South-South geo-political zone, said that the claims that some youths lay in wait for ‘free oil money’, was not targeted at Niger Delta youths.

He said that youths from the region are hardworking, industrious and excellent in whatever endeavour they are into, adding that it was unfortunate to brand youths of a country like Nigeria as lazy.

According to him, Niger Delta youths were excelling in their various fields in the country and oversea, stressing the the sweeping statement credited to President Buhari was un-presidential.

He said that leaders of the region were liaising with relevant stakeholders to ensure that the ugly incidents of the past doesn’t repeat themselves in the region.

“We don’t want another Ogoni unfortunate incident. Gbaramatu people will not suffer another offensive. That’s why we are doing everything possible to ensure the relative peace that we have today is sustained and ensure the federal government keep to its promises”.

Nkanga, who chaired the occasion, however cautioned youths against blocking oil exploration in the region unjustly, saying that genuine agitation by youths of the region can’t be termed as act of laziness.

He added that the federal government have no reason whatsoever to give excuse for the underdevelopment of the region now that there is peace and a formidable organ of communication and interfacing.

“Before now, they give us excuse that they don’t know who to talk to but today we have a united body to dialogue with so they can’t give us excuses anymore.

“We want the federal government to treat us as the beautiful bride that we are. We want Nigeria as a nation to see us as the bed rock of the wealth of this nation, because that’s what we are”, urging youths to shun any act inimical to the development of the region.

The marriage ceremony which was graced by the creme de LA creme in the society, including captains of industry, bank executives, various youths and women groups, attracted the Deputy Governor of Delta State, Barr. Kingsley Otuaro who admonished the couple to hold on to the love they had professed before God and man at all times.

Father of the groom, High Chief Godspower Gbenekama, the Fiyewei of Gbaramatu Kingdom, thanked all who took out time to honour his invitation, saying that indeed it was a great event.