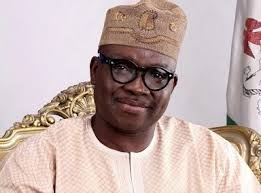 Ekiti State Government has described as total falsehood, report that the State borrowed a total sum of N56 billion since Governor Ayodele Fayose assumed office and that a fresh N25 billion loan was applied for.

“The only fresh loan taken by the government of Fayose was the N10 billion grant from the Excess Crude Account, which was released to all States for capital projects, N2.8 billion requested from Wema Bank to pay State Universal Basic Education Board (SUBEB) counterpart fund out of which N1 billion has been accessed and N600 million for MDGs counterpart fund, which has been repaid.”

The government said “the report, which was attributed to the Debt Management Office (DMO) was orchestrated from the media office of the Minister of Mines and Steel Development, Dr Kayode Fayemi, who is obviously struggling albeit unsuccessfully to redeem his battered image by trying to change the narrative from the debt he plunged Ekiti State to and the wanton looting of the treasury when he was governor. We are aware of how hard Fayemi’s media handlers tried yesterday, to get the false report published in major newspapers, claiming that they had a classified document from the DMO.”

Special Assistant to the State Governor on Public Communications and New Media, Lere Olayinka, who reacted to the report in a release issued on Monday, said; “There is no recent bulletin from the DMO website concerning debt owed by any state as claimed in the false report. Nigerians, especially Ekiti people can visit the DMO website: https://www.dmo.gov.ng/debt-profile/domestic-debts for further clarification.”

“We are however not unmindful of the battered image of the APC in Ekiti State and the attempt to change the narrative to ‘Fayemi’s government truly plunged Ekiti into debt, but Fayose’s government has borrowed more.’ This is more like someone admitting to being a thief but calling others thieves too.

“No matter how hard Fayemi and his spin-doctors try, they cannot erase the fact that apart from regular monthly allocation and Subsidy Reinvestment Programme (SURE-P) fund among others, Fayemi’s received N46.4 billion from the Excess Crude Account, yet he took N25 billion bond and N31 billion commercial bank loan. One of such frivolous loans was the N5 billion obtained from Ecobank without the DMO approval, using Fountain Holdings Limited, a company with N15 million share capital.

“Finally, the website of the DMO is www.dmo.gov.ng, Nigerians can visit the website to see whether or not there was any bulletin published this month concerning debt owed by Ekiti State government.”